There’s voluminous evidence demonstrating that income inequality has skyrocketed in the United States over the past few decades and is now higher than in virtually every other developed country. This might not be all that bad if income mobility had also increased, but a number of recent studies have shown just the opposite: at best, mobility is no better than it’s ever been, and it might actually have decreased a bit. Generally speaking, the rich are a lot richer than they used to be, and unless you start in an upper middle class family to begin with, the odds of ever joining the ranks of the rich have gone down.

But why? The Pew Economic Mobility Project gives us a clue today. The chart on the right compares four big English-speaking countries on a single measure: vocabulary test scores of five-year-olds. You’d expect 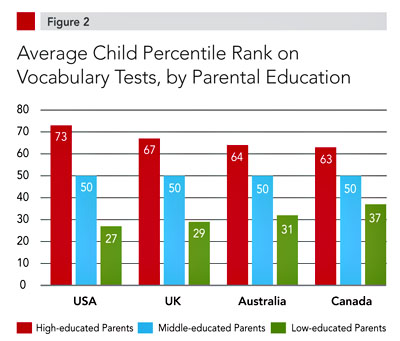 Now, it’s pretty unlikely that Canadian kids with low-educated parents are genetically unluckier than American kids with low-educated parents. Genes may account for some of the overall difference between rich and poor kids, but not for the difference between Canada and the U.S. That has a lot more to do with how we raise our kids and what kind of attention we give them at early ages. On that score, the United States does wretchedly. We simply don’t give our poorest kids a fair start in life.

More on that tomorrow morning.