David Brooks writes today about the endless fighting and planning problems that have kept the World Trade Center site from being rebuilt for so long:

Born in grief and passion, the whole enterprise was soon plagued by furious discord. Personalities clashed. Practicalities were ignored. Building budgets didn’t mesh with the deadlines. There were arguments about the memorial and the proper definition of the word “patriot.” There was a lot of planning but not much execution. Symbolism eclipsed reality.

During his brief tenure, Gov. David Paterson hired Chris Ward, formerly Mayor Michael Bloomberg’s environmental protection commissioner, to take over the Port Authority and rescue the shambolic ground zero project….Ward set prosaic priorities — what would be built first, which parts of the project could wait. He cut costs by doing things like 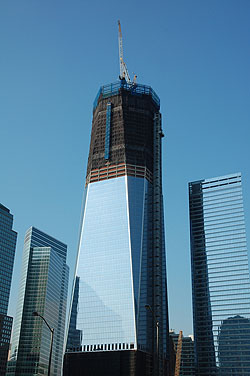 putting columns in the design of the transportation hall. He changed the name of Freedom Tower to One World Trade Center. He divided the construction deals into manageable chunks.

….[Ward] rescued the ground zero project by disenchanting it, by seeing it as it is, not through shrouds of symbols — by attending closely to all the practical complexity. American politics in general could use that sort of disenchantment.

Brooks uses this as a metaphor for the way we end up in gridlock whenever concrete issues become subsumed in passion and cultural symbolism. But this is a bad example. Has One World Trade Center taken unusually long to build? Not as much as you’d think. The original building was first proposed in 1961. There were fights between New York and New Jersey that weren’t resolved until 1962. Agreement with the city of New York wasn’t reached until 1966. Demolition began that year, and contracts were let in 1967. Construction began in 1968, and the second tower was completed in 1971. Elapsed time: ten years.

And what about its replacement? The design competition was held in 2003 and the completion date is now estimated to be 2013. Elapsed time: ten years. You can quibble with these numbers a bit if you want. Maybe the WTC was really finished in nine years since that’s when the first tower was completed, and maybe OWTC has really taken eleven since planning began in 2002. Either way, though, it’s not a big difference.

Am I picking nits with Brooks? Yes, in a way. But there’s an important point here about romanticizing the past. New York wasn’t a paragon of efficiency in 1960 and it’s not a poster child for dysfunction in 2011. Big buildings just take a long time to put up in the modern era.

Like Brooks, I’m pretty disgusted with politics most of the time. But it’s not really conflicts over values that are at fault, it’s the fact that our institutions have become unable to deal with them. Partly this is because one of our major parties has dived head first into a rabbit hole and doesn’t look ready to come out anytime soon. But mainly it’s because our political structure has evolved into a weird hybrid that has the tight party discipline of a parliamentary system contained within the institutional framework of a presidential system that was specifically designed to work best without any party machinery at all. That’s a recipe for disaster. I’m not sure what the answer is, but we shouldn’t kid ourselves into thinking that the problem is simply one of passion about politics. We’ve always had that.