Over at The Corner, Andrew Stiles recounts a conversation he overheard this morning about the Occupy Wall Street protest. The speaker wasn’t especially lucid and ended up explaining that he was just generally opposed to greedhead capitalists:

Sure. Because we all know splendidly greed- and corruption-free socialist government is, and how “the 99 percent” of Americans are just clamoring for it. Certainly, this one fellow doesn’t speak for all the protesters, but being familiar with how a (frighteningly) large portion of my generation thinks—and in many cases, has been taught to think—this seems like a fairly accurate distillation of their collective mindset: vague, incoherent, idiotic.

Funny, isn’t it? Conservatives sure get plenty offended when people use language like this to talk about tea partiers. But find some guy in a coffee shop who dislikes bankers 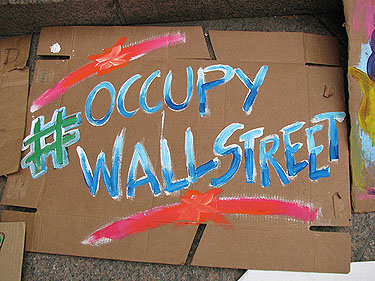 but can’t really articulate a fully fleshed out worldview to explain it, and suddenly an entire generation is a bunch of morons.

I’m going to continue to allow other people to follow OWS more closely than me—Andy Kroll has a good piece about union involvement here, and Michelle Goldberg has another here—but I do find it sort of fascinating. The lack of a clear message has never bothered me, any more than the lack of a clear message in the early days of the tea party bothered conservatives. If OWS continues to grow, messages will start to germinate organically. Some of them will spring from the anarchist roots of the founders, but they’ll become fringe issues pretty quickly and shouldn’t scare off the rest of us—sort of like tea party demands to repeal the 17th amendment. Others will be more mainstream: repeal of the Bush tax cuts on the rich, stricter financial regulations, more stimulus spending, etc. These will become the equivalent of tea party demands for lower taxes and reduced spending.

And just like the tea party, mainstream logistical support will be key. The tea party movement thrived partly because of genuine grass roots anger, but also because it got lots of publicity from Fox News and plenty of money and organizational support from national conservative groups. Likewise, on our side, union support is key because, even in their current emaciated state, unions are still the only big, institutional pressure groups in America focused almost entirely on economic issues. Jon Cohn puts it pretty well:

During my lifetime, the activist left has gone through several incarnations, focusing on a series of different causes. For much of the 80s and 90s, very generally speaking, the focus was largely on identity politics. Then attention moved to globalization and then, during the Bush presidency, to wars abroad.

As far as I can tell, this is the first time the activist left has focused seriously on issues of economic opportunity at home. In fact, I think it’s the first time such issues have been front and center since the 1930s, although I’ll defer to the historians on that one. Either way, this movement has a chance to help shape the debate over economic policy in this country—not merely about the financial industry, which is the object of protests right now, but also about inequality generally.

This is a point I was trying to get across in my article earlier this year about unions and plutocracy. My main takeaway was: With unions in a state of decline, what will take their place as a big, organized, persistent source of left-wing pressure on economic issues? I didn’t know the answer then, and I still don’t. But Occupy Wall Street has a chance—a fighting chance, anyway—of becoming that.