I can’t help but be fascinated by these excerpts from Walter Isaacson’s new biography of Steve Jobs:

Jobs, who was known for his prickly, stubborn personality, almost missed meeting President Obama in the fall of 2010 because he insisted that the president personally ask him for a meeting. Though his wife told him that Obama “was really psyched to meet with you,” Jobs insisted on the personal invitation, and the standoff lasted for five days. When he finally relented and they met at the Westin San Francisco Airport, Jobs was characteristically blunt. He seemed to have transformed from a liberal into a conservative.

“You’re headed for a one-term presidency,” he told Obama at the start of their meeting, insisting that the administration needed to be more business-friendly. As an example, Jobs described the ease with which companies can build factories in China compared to the United States, where “regulations and unnecessary costs” make it difficult for them.

Jobs also criticized America’s education system, saying it was “crippled by union work rules,” noted Isaacson. “Until the teachers’ unions were broken, there was almost no hope for education reform.” Jobs proposed allowing principals to hire and fire teachers based on merit, that 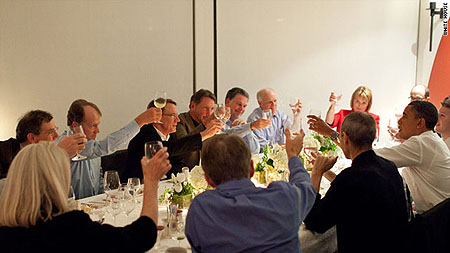 schools stay open until 6 p.m. and that they be open 11 months a year.

OK, three things. Regarding the first paragraph: Jeebus, what a dick Jobs could be. Regarding the second paragraph: We all know why it’s easier for Foxconn to open a factory in China. I think I’ll keep our child labor and environmental rules intact, thank you very much. And regarding the third paragraph: Just where does Jobs think the massive budget increase is going to come from that would allow schools to stay open ten hours a day and eleven months a year? Even if he’s right about the dire effect of teachers unions, something with pretty scanty empirical evidence, I don’t think that California, to pick a state at random, is really up for the $20-30 billion tax increase it would take to roughly double instructional hours. Besides, even a really good intensive preschool program would cost less than that and almost certainly deliver better results. Think different, people!

Other than that, though, Jobs sounds like a great guy.