Politico reports that the Obama administration, in the person of Jan Eberly, Treasury’s new assistant secretary for economic policy, is pushing back on the Republican notion that “regulatory uncertainty” is damaging the economy. It’s sort of sad that she has to waste valuable neurons on this, when she could instead be doing actual useful work, but I guess that’s politics for you.

Anyway, her case is here. And part of her case is that the American economy isn’t actually suffering from any more uncertainty than the rest of the world, which suggests that American regulations can’t really be having much of an impact. The chart below shows two measures of stock market volatility, one for the U.S. and one for Europe, and as you can see, they’ve moved pretty much in lockstep during the Obama era.

Which, to make a separate point, is an impressive demonstration of the fact that we live in a global economy, not just an American one. When stuff happens, it affects us all. Keep that in mind when American bankers and Treasury officials keep telling us that “we aren’t very exposed” to a possible eurozone disaster. My guess is that we’re pretty exposed after all, which is a good reason for all of us to hope that Europe gets its act together soon. 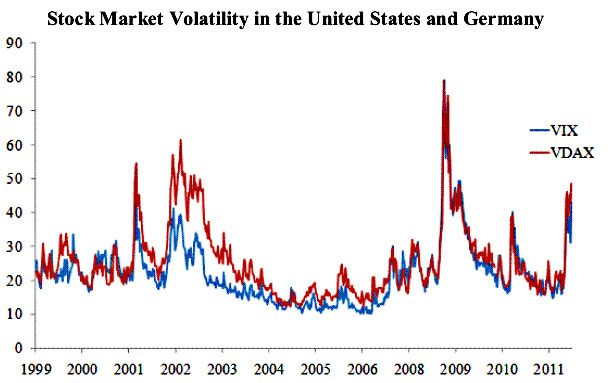