Via Adam Ozimek, here’s a handy chart that demonstrates something you probably thought you knew already: a high rating on Yelp is good for business. Harvard’s Michael Luca did a clever study that took advantage of “discontinuity effects.” Yelp rounds off its rating for public consumption, so a restaurant that crosses the boundary from, say, a rating of 3.2 (rounded down to three stars) to a rating of 3.3 (rounded up to 3.5 stars) gets an extra boost on its Yelp page. There’s probably very little difference between 3.2 and 3.3, so if a restaurant’s revenue increases it’s most likely due solely to its Yelp rating.

Sure enough, that’s what happens. As the chart on the right shows, revenue remains fairly flat as ratings go up slightly and then suddenly jumps as a 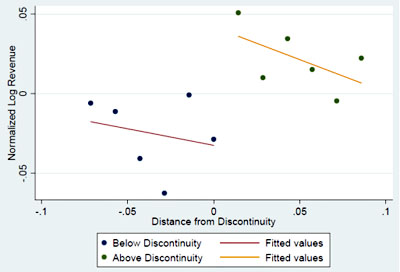 restaurant passes the rounding-off point and gets an extra half star:

I present three findings about the impact of consumer reviews on the restaurant industry: (1) a one-star increase in Yelp rating leads to a 5-9 percent increase in revenue, (2) this effect is driven by independent restaurants; ratings do not affect restaurants with chain affiliation, and (3) chain restaurants have declined in market share as Yelp penetration has increased. This suggests that online consumer reviews substitute for more traditional forms of reputation. I then test whether consumers use these reviews in a way that is consistent with standard learning models. I present two additional findings: (4) consumers do not use all available information and are more responsive to quality changes that are more visible and (5) consumers respond more strongly when a rating contains more information.

How robust is this result? I’m not sure. Luca’s regression suggests that revenue actually goes down except around the discontinuity, which is peculiar. Just eyeballing the chart without any lines drawn in, I can imagine instead drawing a simple upward-sloping regression line showing that restaurant revenue increases smoothly as reviews get better. That eliminates the anomalous downward trend, and it’s not instantly clear that the standard error would be much bigger than doing it Luca’s way. Unfortunately, the Greek-letter section of the paper is over my head, so I’m not sure. Yelp fans demand further research on this crucial topic.

UPDATE: Just to give you an idea of what I’m talking about, here’s the chart redrawn with a single upward-sloping regression line: 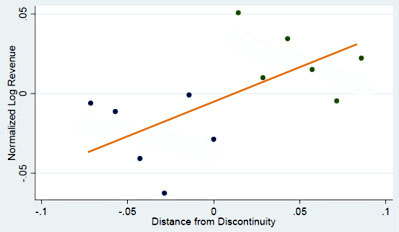 This is just eyeballed, so don’t take it seriously. Still, the data points are really scattered, and the fit looks equally poor on both Luca’s version of the chart and mine. It’s not clear to me that the discontinuity effect is really there.