Is a tidal wave of both existing and upcoming new regulation responsible for the sluggish state of the economy? This is one of those arguments that’s so transparently dumb that I sometimes think its only purpose is to force liberals to waste time arguing about it. It’s like that old story about LBJ spreading a rumor that his opponent was a pig-fucker. You can’t say that, it’s a lie, Johnson’s campaign manager told him. “I know,” he replied, “I just want to make him deny it.”

Still, you gotta fight it. EPI’s Larry Mishel wrote a pretty definitive takedown while I was off in the Bay Area with lousy WiFi reception, and among other things he notes that business investment—which ought to be highly sensitive to the regulatory climate—has recovered considerably better over the past two years than it did during the first two years of the Bush recovery:

The data show that investment has increased more in this recovery than in the prior two recoveries and roughly the same as that of the 1980s recovery. It is interesting to note that there was no growth in investments (as a share of GDP) in the George W. Bush recovery. That means that this recovery, with Obama regulations pending, is far more investment-led than the recovery under the deregulatory Bush administration. So, investment does not look like it is being held back, at least relative to other recoveries and the size of the market.

The chart is below. Bottom line: If demand were high but regulation was holding back recovery, then investment levels would be weak, employer surveys would be full of complaints, and businesses would be making lots of temporary hires in order to sell more stuff now without the danger of adding permanent payroll. But none of these things is true. Our problem is high debt levels and weak demand, not business-deadening regulations. 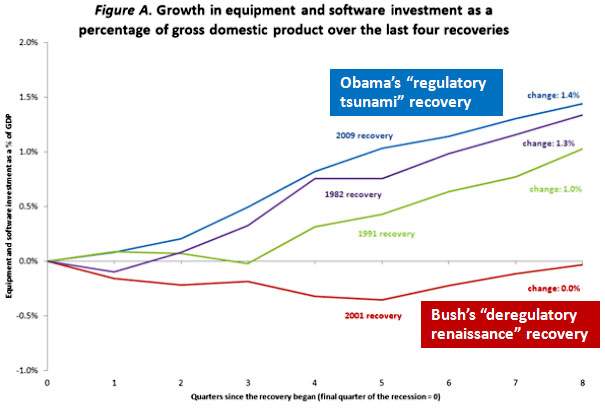