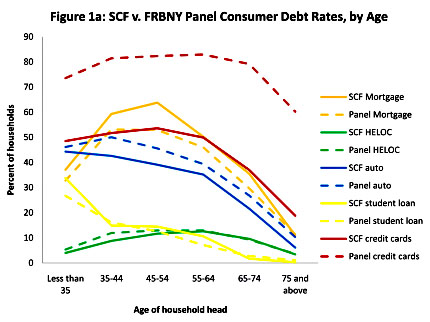 Here’s an interesting little chart that requires a bit of explanation. For five different categories, it compares the number of households who think they have outstanding loans (solid lines labeled “SCF”) vs. the number of loans that lenders think they’ve given out (dashed lines labeled “Panel”). It provides this comparison for six different age groups. Needless to say, the lender data is highly accurate, so any difference between the two lines means that borrowers are kidding themselves about whether they have any outstanding debt.

For example, the blue lines represent auto loans, and they’re pretty close to each other for all age groups. This means that households have a pretty good idea of whether they owe any money on their cars. Ditto for mortgage loans, home equity loans, and student loans.

When I first saw this, I immediately thought I knew the problem. If I were surveyed about credit card debt, I’d report that I didn’t have any. That’s because I pay off my cards every month. But the card companies are probably totting up the charges I’ve already made this month and counting it as outstanding debt. Discrepancy solved!

But guess what? The Fed economists who wrote this report aren’t idiots! They thought of this too:

So what is the answer? The authors don’t have one. Those three explanations are all they have, and even when they control for them there’s still a huge gap remaining. The simplest explanation is probably the right one: American consumers just don’t have any idea how much credit card debt they have.