Just last week Rick Perry called Social Security a Ponzi scheme and a “monstrous lie.” This week he revises and extends those remarks in USA Today:

Now, I’m pretty sure the Washington Post would have given Perry a little more room on their op-ed page if he’d truly wanted to speak frankly and gutsily about how to fix Social Security, as opposed to merely saying that we ought to speak frankly about it and then calling it a day. But for some reason, Team Perry decided that USA Today, with its vast hotel-bound audience and 300-word limit, was a better bet.

Which is too bad, because of course, we should speak frankly about the financial condition of Social Security. So here’s some gutsy talk for y’all: Social Security has a small long-term funding shortfall. It can be fixed easily. The CBO recently estimated that Social Security has a long-term cumulative deficit of 0.6% of GDP, and the table below lists 30 options for fixing this. All you have to do is pick some combination of options that adds up to 0.6% and you’re done. It’s so easy that even Rick Perry can do it.

Personally, I’d wait and begin phasing in changes starting in about 20 years or so, which would require picking a basket of options that adds up to something like 1.2% or so. But that’s just little old coastal left-winger me. Either way, though, whether you make the changes now or later, it’s all pretty simple. And that, my friends, is some gutsy talk. 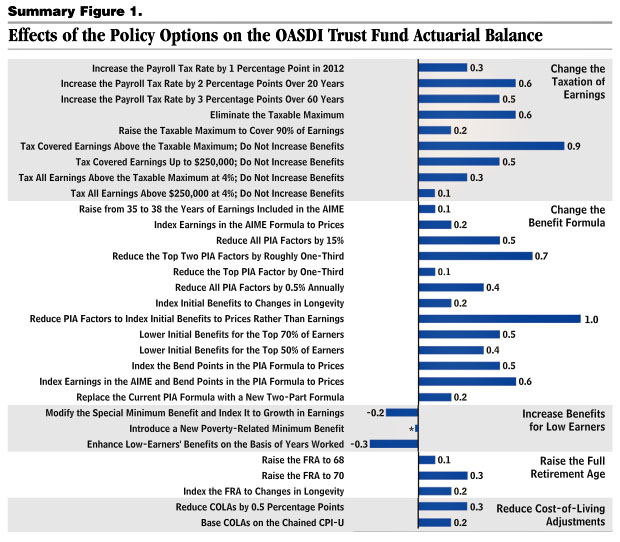