Man, I just don’t have anything to say after that debate. Was it just my mood, or was the crazy really amped up to 11 this time around? I could barely pay attention to most of the raving coming from my TV.

I guess Perry is naturally the big news. My take is, I suspect, the conventional one: he didn’t do so well. He didn’t hurt himself really badly or anything, but he stumbled a lot. I mean, Social Security just isn’t a Ponzi scheme. Period. Taxpayers 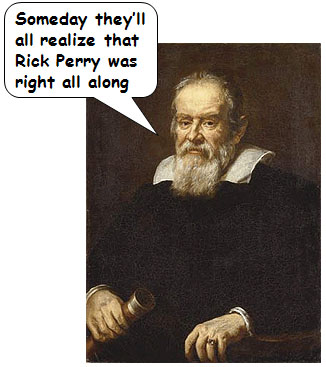 pay taxes, and those taxes get sent to retirees. End of story. It’s pretty much the same way we fund the Pentagon, the courts, the FBI, and everything else. Taxes come in, benefits go out. It’ll keep working forever with only minor tweaks.

On climate change he was weirdly hesitant. I mean, he must have known this was coming, right? But he couldn’t get a grip on himself and give a coherent answer. He just repeated over and over that lots of scientists weren’t sure about global warming, which is just flatly wrong, and then flailed around a bit on Galileo — which didn’t exactly illustrate his case the way he thought it did — before shifting into some completely irrelevant story about how Texas reduced air pollution. “That’s the way you need to do it, not by some scientist somewhere saying, ‘Here is what we think is happening out there.'” WTF?

Other than that, Perry just seemed generally unprepared and unwilling to really engage with the issues. I guess now we know why he’s been afraid to give any interviews since he announced his candidacy. He’s afraid he’ll look like a kid who got called on in class after failing to study the night before. He needs to raise his game.

UPDATE: David Frum says Perry seemed “nervous and irritable.” Will Wilkinson: “Perry came off halting, slightly confused, and peevish.” I thought so too. I’m a little surprised that so many people thought Perry showed off his alpha male qualities tonight. Sure, he was generally aggressive and refused to back down from anything he’d said before, but his overall demeanor seemed a little twitchy and high-strung to me. But then, I’m not exactly the target audience here.