Matt Yglesias takes a look at a recent Gallup poll about perceptions of government waste and says, “I infer from the fact that state/local government is seen as less wasteful than the federal government and that older people have a much higher waste-perception than younger 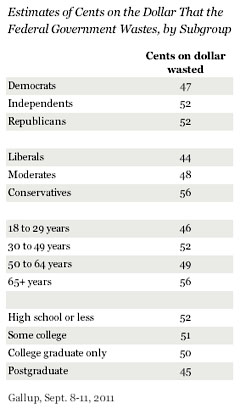 people that this is driven by the fact that people don’t understand Social Security and Medicare.” I thought I might write a post about why older people perceive so much waste, but I changed my mind when I clicked through and found this summary table of responses.

What I’d really like to know about this is what people are thinking when they hear the word “waste.” Are they thinking about conventional waste, money that’s just flatly going down a rathole and not doing what it’s supposed to be doing? Or are they applying the term to spending they just don’t like? Is this a matter of pacifists calling the entire Pentagon budget waste and libertarians calling the entire Medicare budget waste?

There’s no telling, but either way this number is astonishingly large, and it’s another demonstration of the overwhelming success conservative messaging has had over the past three decades. Perception of waste has gone up slowly but steadily since 1980 (which means the latest numbers aren’t due to stimulus spending or anything like that), but the truth is that nothing much has actually changed on the waste front since then: the federal budget looks about the same now as it did in 1980, it’s roughly the same size, and the amount of bad management is probably pretty similar. There are really only two big things that have changed: (1) a huge slowdown in income growth, which probably makes people begrudge their taxes more, and (2) three decades of scorched-earth conservative warfare against the very idea of government.

And it’s worked. Hell, if I thought 50 cents of every dollar was wasted, I wouldn’t support another dime in taxes either. It’s insane that people think this, though, and it’s a sign of the massive failure of liberal imagination that we’ve allowed it to happen.