A few days ago, a reader emailed wondering why “all of a sudden there have been stories in the MSM about Obama losing support among Jewish voters, presumably due to insufficient support of Israel. That’s odd, because he’s been solidly pro-Israel.” In my reply, I mentioned a recent poll showing that Obama had lost a lot of Jewish support, but beyond that I brushed it off as just another movement conservative attack line. Obama is weak, Obama wants to raise your taxes, Obama doesn’t understand business, Obama hates Israel, etc. etc. It’s a useful attack, and it’s one that conservatives make about liberals all the time. Obama’s just the latest victim.

I’d pretty much stand by this, but if you want a somewhat less cynical explanation, John Heilemann provides it in this month’s cover story in New York magazine. It mostly comes down to Obama’s pressure on Israel to halt 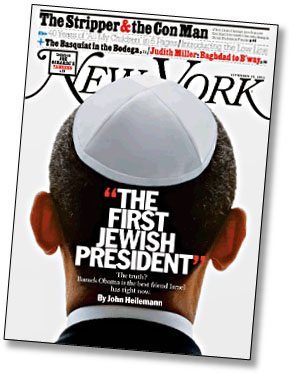 further development of its West Bank settlements, something that right-wingers are flatly opposed to. But Team Obama also screwed up its messaging:

Equally important, Obama’s advisers argue, is that the idea that the administration demanded little of the Palestinians is simply false. “I called it synchronized swimming,” recalls Prince. “The Israelis would do settlements, the Palestinians would do some stuff on incitement [of violence against Israel] and security, and other Arab states would undertake a variety of measures that would be steps to normalization. It could be reopening trade offices. It could be allowing overflights. It could be opening direct cell-phone connections. All stuff the Israelis said they really wanted. We spent many more hours in meetings with Arabs about Arab steps than we did with the Israelis. We had equally tough conversations with Arabs; the president had some hard meetings. But that didn’t get reported.”

Lazy journalism can be cited for the lack of coverage of those efforts, but Obama and his people bear fault, too. “Because no administration had been that clear and unambiguous with Israel on settlements, that was news,” says Emanuel. “But there was a sense that it was one-sided. We had an obligation—and this is where we deserve a yellow card—to explain what we were doing with the Palestinians or Arabs, to put more air in the tires on that side. Not tone down what we said on settlements, but work harder so there was more recognition of the parity that existed with the Arab violations.”

Another blunder, and not a minor one, made by the administration revolved around Obama’s vaunted speech to the Muslim world in Cairo that June—which more than a few Jews perceived as coming at the expense of Israel, especially when Obama failed to visit Jerusalem on the same trip (or at any time thereafter). “We made a mistake,” admits one senior administration foreign-policy adviser. “Nobody thought of it as a big deal at the time, but, I mean, you’re in the neighborhood, you’re right down the street, and you don’t stop by for coffee?”

By the end of 2009, the cumulative effect of these episodes was plain. On the right, the claim that Obama had shown his true colors was de rigueur; as the conservative pundit John Podhoretz put it, “The turn against Israel that so many predicted during the 2008 campaign is coming to pass.”

On a substantive level, Obama has had Israel’s back over and over and over since he took office. Heilemann provides chapter and verse in his piece. But for conservatives, this isn’t enough. They flatly reject the idea that the United States should ever pressure Israel over anything. The fact that Obama did so was more than enough to confirm their belief that he’s anti-Israel at heart.

Of course, as Heilemann and many others have pointed out, Obama’s approach is almost certainly in Israel’s best interest. One way or another, Israel has to make peace with the Palestinians. They can’t absorb the West Bank, since that would make Israel majority Arab within a few years, nor can they occupy it forever. There was at least a chance that Obama’s approach could have cut through this Gordian knot. But Benjamin Netanyahu wasn’t willing to consider any settlement slowdown of any sort, and the Israeli public has endorsed his hardnosed attitude by keeping him in power. So we’re stuck, as usual.

And, really, there’s no reason for Netanyahu to budge. He apparently doesn’t accept the necessity of making peace anytime soon, and he knows perfectly well he can treat Obama any way he wants and pay no price for it. His public harangue of Obama in May, which should have made any American cringe regardless of partisan affiliation, was proof enough of that. It was a loathsome performance on a bunch of different levels, but it brought cheers from Republicans and nothing but nervously averted gazes from Democrats. So why should he change his tune?