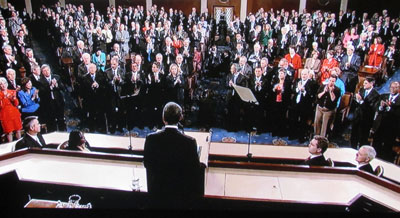 So what about the nitty gritty of Obama’s American Jobs Act? Is it any good? At a policy level, it rings in at about $450 billion, much bigger than most people were expecting. Here’s how it breaks down:

The White House fact sheet is here. So would it work? Macroeconomic Advisors, a private forecasting firm, estimates that it would boost GDP by 1.3% in 2012 and raise employment by 1.3 million. This is roughly equivalent to the CBO’s low-end estimates of the original stimulus package in 2010, and the CBO has estimated that 1.3 million new workers translates to a decrease in unemployment of 0.7%.

Moody’s is a little more optimistic: “The plan would add 2 percentage points to GDP growth next year, add 1.9 million jobs, and cut the unemployment rate by a percentage point.”

So why did it take me so long to write a post about the actual policy impact of the AJA? Partly because I was waiting for the private forecasters to weigh in on its effect. But to put my cards fully on the table, there’s also this: much more than usual — which is already a high bar — chattering about the policy impact of Obama’s plan simply feels like a charade. I can’t remember the last time that the actual merits of a policy proposal mattered so little. The details of Obama’s plan will simply have no impact at all on whether it’s passed. Among Republicans, reaction to Obama’s proposal will be 100% guided by political considerations.

I don’t think anyone really disputes this. And maybe I’ll buck up and get all wonkish about this stuff after I recover this weekend. I usually do. But the truth remains that the policy impact of Obama’s plan is purely a sideshow. Arguments on that level are all sound and fury, signifying nothing. Republicans just flatly don’t care.