Mitt Romney’s shiny new jobs plan is about as boring and boilerplate as you’d expect a conservative jobs plan to be. (Nickel version: lower taxes on the rich, less regulation of big business, punitive labor laws, etc. In other words, the usual.) But Matt Yglesias points 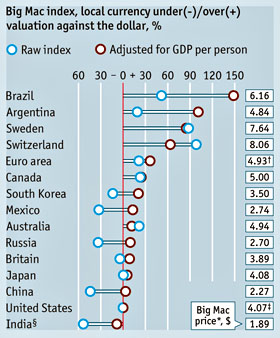 out that Romney also engages in some good old-school China bashing, promising the following executive order on his first day in office:

There’s hardly a presidential candidate in the past 20 years who hasn’t promised to “get tough” with China. It’s a real crowd pleaser. But what makes Romney’s brand of China bashing doubly ironic is that for the first time in a while, it’s not clear that China’s currency is really all that undervalued anymore. The Economist, after adjusting its famous Big Mac index for the cost of labor, concludes that the yuan is actually trading at pretty much its fair value.

Now, the Big Mac index is hardly the last word on this subject, and there are some good reasons for thinking the yuan remains undervalued. Michael Pettis has a discussion of some of the underlying issues here. Still, the yuan has been rising over the past few years, and is probably undervalued less today than it’s been in a decade. Whatever the truth is, though, I promise you this: if Mitt Romney becomes president, the very first promise he’ll break is his promise to designate China as a currency manipulator. Like every other presidential wannabe, he’ll quickly discover that once you’re actually in the Oval Office, there’s a stiff price to be paid if you actually want to follow up on your crowd-pleasing China bashing. He won’t be willing to pay that price any more than any other president has been.