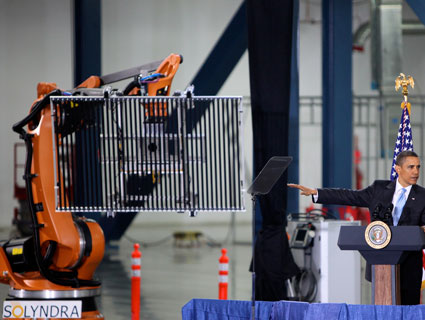 President Barack Obama speaks at an event at Solyndra in May 2010. The company went belly-up in August.<a href="http://www.flickr.com/photos/jurvetson/4645185762/">jurvetson</a>/Flickr

You’ve probably heard of Solyndra by now, right? It’s the solar power company that got $500 million in Recovery Act loans from the Department of Energy and then went belly up a couple of weeks ago.

Conservatives have been trying to paint this as a big scandal of some kind, despite the fact that: the company had plenty of private investors too; it’s the only DOE loan that has failed so far; and there’s no real evidence that anyone in the White House did anything worse than push OMB to speed up their decision-making process a bit in 2009. Stephen Lacey has the full timeline here.

But I think Dave Roberts probably has the bigger picture right:

Watching this unfold over the last week, I keep thinking back to “Climategate.” When it first broke back in late 2009, lefties and bloggers and Dem lawmakers just ignored it, because it was obviously dumb. This left the field entirely open to a massive attack from the right, coordinated among ideological media, staffers, lobbyists, and pols. When the left finally stirred itself to action, all that emerged were a bunch of long, boring investigations into the details and good-faith efforts to be fair about how both sides a point. By the time five separate investigations had cleared the scientists of all wrongdoing, the damage was done. Now we’re seeing the same script play out again.

…The right is going after this whole hog, trying to make the name synonymous with clean energy boondoggle. And the left is flailing around, throwing out this fact and that fact with no coherent message. Lord am I tired of watching this script play out.

Unfortunately, I think that a bit of flailing was inevitable. Conservatives had a clear attack line: anything and everything that makes Solyndra look bad. They didn’t care what. Liberals didn’t have the same luxury. At the time this story broke, none of us knew enough about Solyndra to really have any idea if the company itself was defensible, so a bit of hesitancy was inevitable. But Dave is right: At this point we do know enough, and there’s really no reason to hesitate any longer. Basically, Solyndra was working on a solar technology that promised to be cheaper than silicon, and at the time of the loan it looked really promising both to DOE and to private investors. But then the market turned: Silicon prices dropped, and China started producing super low-cost silicon PV. That spelled doom for Solyndra. They had a good idea, but it didn’t work out.

In any case, Solyndra is a tiny fraction of DOE’s green-energy loan program, and Solyndra’s loan guarantees are dwarfed by those of both fossil fuel and nuclear companies, which range into the multiple billions. There was no scandal in the loan process, and there’s nothing unusual about having a certain fraction of speculative programs like this fail. It’s all part of the way the free market works.

Want to learn more? Read the timeline here, and then listen to Rep. Ed Markey at Wednesday’s hearing. You’ll learn the facts from one, and how to talk about Solyndra from the other. No more flailing, okay?