We’ve talked before about the Republican genius for taking advantage of political norms that have traditionally been followed by both parties but have never been actual rules. This has produced a growing list of partisan ambushes like mid-decade redistricting, turning the Senate into a 60-vote body, holding the debt ceiling hostage, etc. So what’s the next norm to be flattened by the GOP steamroller in a surprise attack? In what must be a new record, Stan Collender writes today about two norms that Republicans have crushed into dust in a single week.

First up is a letter from the Republican leadership to Ben Bernanke that ominously warns him to “resist further extraordinary intervention in the U.S. economy.” This comes on the same day that the IMF slashed its estimate of economic growth for 2011 and 2012 to an 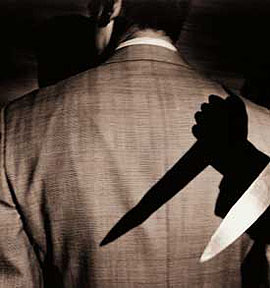 almost recession-like 1.5% — precisely the time that the Fed probably should carry out a few extraordinary interventions in the economy.

The Fed, of course, is traditionally supposed to be left free of political influence. But there’s an election coming up and, as Stan puts it, the GOP sees economic hardship “as the path to election glory this November”:

Why take on the Fed? The Republicans have some direct control over fiscal policy because they can either refuse to consider a proposal in the House where they are in the majority or can filibuster legislation in the Senate where they are in the minority. Because the Fed is an independent agency, the GOP can only do what they did today in the letter by threatening to bring down the wrath of god if it dares take any action to get the economy moving.

….My question: If Rick Perry — one of the wanna-be GOP candidates for president — says that Bernanke’s actions to date have been treasonous, what do you call today’s Republican demand that the federal agency with the legal responsibility and the potential power to help GDP grow and unemployment to fall not do anything to help the American economy?

What do you call this? Well, as of yesterday, you can call it politics as usual.

Next up is a legislative norm arcane enough that I’d never heard of it. Apparently the Republican leadership is planning to hold off on approving a budget even though the spending levels for FY2012 have already been agreed to. Instead they’re going to pass only a short-term continuing resolution. Why? There’s really no good reason. They just want another chance to hold the White House hostage:

The commonly assumed but unstated reason for a short-term CR is that the House GOP wants to have increased political leverage on budget and other issues by being able to hold yet another potential government shutdown over the heads of Congressional Democrats and the White House. This time it supposedly will be policy riders — changes in authorizations — rather than spending levels that will be the biggest points of contention.

….This will sound quaint to some and unimaginable to others, but there was a time when doing what the GOP apparently is planning by authorizing on appropriations bills was considered by most Members of Congress to be as much a major legislative sin as usurping another committee’s jurisdiction….In fact, authorizing in an appropriations bill has been considered so taboo on Capitol Hill that Republicans and Democrats on the authorization committee that would be affected by the proposal typically have worked together to prevent it from happening.

Them’s the breaks, suckers. It was a nice tradition while it lasted. And keep in mind that the week is young. There’s no reason that Boehner and company should be satisfied with exploding only two norms this week. There might be more yet to come.