Here’s a little bit of a follow-up to my post yesterday about oil production and how it may now be a binding constraint on economic growth. The basic argument is fairly simple: Global production of oil has hit a ceiling — or, at best, will grow very slowly for the next few years on its way to a ceiling in 2015 or 2020 or so — and this is going to cause severe volatility in the global economy. As world GDP grows, demand for oil increases and bumps up against the supply ceiling, prices spike upward, and the world goes into recession. Demand for oil then decreases a bit, the economy recovers, rinse and repeat.

This is a plausible story, but as far as I know there’s very little in the way of rigorous modeling of this entire scenario. At a minimum, any solid econometric model would need to account for the following:

#1 is probably fairly straightforward. Doing the math rigorously is a challenge, but basically this is just a regression of oil consumption on world GDP. The evidence suggests that the relationship here is pretty strong: rich countries may have weaned themselves off oil a bit over the past couple of decades, but poor countries haven’t. As incomes rise in developing countries, demand for oil goes up strongly regardless of how expensive it gets. This means that pretty much any period of global economic growth will very quickly push oil demand up to its supply ceiling.

#2 is a challenge because we’ve only been near the oil supply ceiling since about 2007 or so. There just aren’t very many data points to work with here. However, we do know that earlier this year oil prices rose about $30 when we lost a mere 2% of global production thanks to the war in Libya. This certainly suggests that we’re now in an era where very small changes in demand can have very large effects on price.

#3 would basically be a global version of the work James Hamilton and others have done on the effect of oil price spikes on the U.S. economy. You can see a bit of groping in this direction here, but I don’t think anyone has done any kind of full-scale modeling. 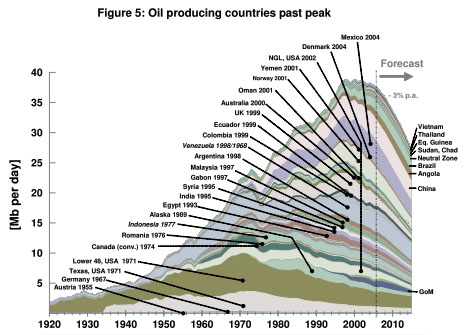 All of this, of course, is contingent on the question of whether oil production really has hit a ceiling. That’s still an open question, but we can say a few things for certain. First, oil production has certainly peaked in most of the world. The continental United States peaked in 1971 and has been in decline ever since. Prudhoe Bay peaked in 1989. The North Sea peaked in 1999. Norway peaked in 2001. China’s massive Daqing field probably peaked around 2005. They’re all still producing oil, but they produce less and less every year.

Second, the discovery rate of giant and supergiant oil fields, which produce most of the world’s oil, peaked in the 1960s and has been in steep decline ever since.

However, there are still some big question marks in this picture. OPEC is one: no one knows for sure if OPEC, and Saudi Arabia in particular, has peaked or not. The Saudis claim they can continue to increase production, but there are some pretty good reasons to think they’re at or near their peak. (They either couldn’t or wouldn’t pump more oil to make up for Libya’s lost production earlier this year, for example.) On the other hand, Iraq’s fields definitely have more production capacity. They just need to rebuild their pumping infrastructure. Still, taken as a whole, the balance of the evidence suggests that OPEC is either at or very near its peak and will be at a production plateau for the next decade or so before it starts to decline.

That leaves so-called “frontier oil” — polar and deepwater fields — and unconventional oil like the Canadian tar sands and Venezuelan heavy crude. This is truly uncharted territory, but it’s wise to take the more optimistic forecasts with a grain of salt. If history is any guide, there will be some spectacular finds in these areas, but also the usual number of disappointments. And even if these sources pan out, the real question is whether they’ll produce enough to offset the declines everywhere else. This is doubly uncharted territory because we don’t know for sure how much oil we’ll get from these new sources and we don’t know for sure what the decline rate will be for the world’s existing fields (improved drilling technology makes a big difference in the rate of decline). These are both hotly contested subjects, all the more so because in the past the official forecasts from places like the International Energy Agency have been so wildly — and frankly unbelievably — optimistic (see here and here).

The chart at the bottom shows an oil forecast from ASPO, the Association for the Study of Peak Oil. When you put everything together, they estimate that world production peaked in 2008 and is now in irreversible decline. My own personal guess (worth exactly what you’ve paid for it) is that this is too pessimistic. I suspect that production will continue to grow slowly for another five or ten years, peaking around 95-100 million barrels per day (compared to current production of 88 mbd). But the ASPO estimate and mine aren’t really as far apart as they sound. Either way, demand for oil will increase faster than supply whenever the global economy is growing, and as long as that’s the case, and we’re bumping along near the peak, oil prices are going to be extremely volatile — and the global economy is going to be volatile right along with it.

This is not something that can be tamed with gasoline taxes in the United States or anything similar. It’s a global phenomenon. But it’s all the more reason we should be making Manhattan Project kinds of commitments to developing alternative energy sources and reducing our economy’s dependence on oil. There’s plenty of low-hanging fruit in the areas of conservation and increased efficiency, and no reason to waste any more time arguing about it. At the very least, we should be doing the easy stuff.

There are plenty of places to learn more about this. If you’re interested in my lengthy takes on this from back in 2005, try reading “Crude Awakening,” a piece I wrote for the Washington Monthly, and this five-part blog series I wrote around the same time in order to provide more detail (and charts!) than I could fit into the magazine. 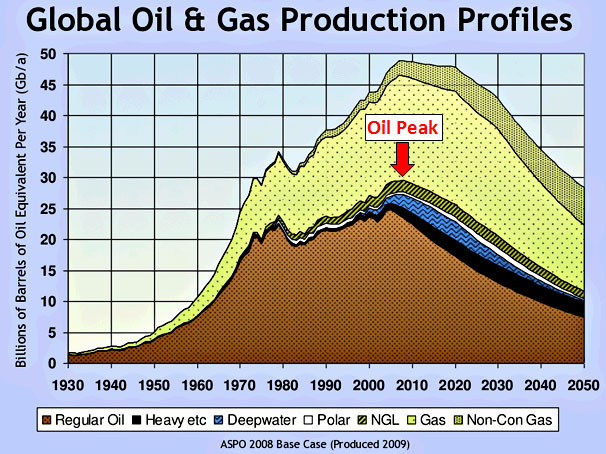