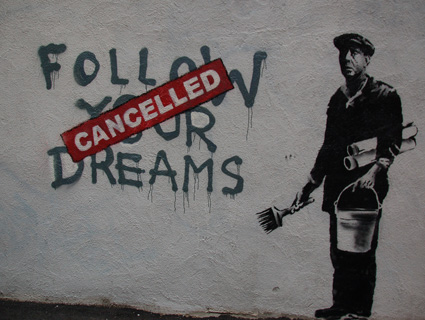 A few months ago I wrote a piece for the magazine arguing that the decline in unionization over the past three decades has been a key factor in the decline of the American left over the same period. But it’s a hard case to prove because there are so many moving parts to it. So I was intrigued earlier this week when my colleague Josh Harkinson linked to a new study that attempts to quantify the effects of unionization on income inequality using a rigorous regression analysis of census data.

The study comes from Bruce Western and Jake Rosenfeld and was published this month in the American Sociological Review. The authors use a model that accounts for both individual membership in unions as well as overall unionization rates in specific industries and regions. It also controls for education, age, race, ethnicity, and gender, which allows them to estimate the effect of unionization both between groups (e.g., the evolution of income inequality between high school dropouts and high school grads) and within groups (e.g., the evolution of income inequality within the entire subset of high school grads).

Once their model was in place, Western and Rosenfeld could manipulate their variables to estimate what income inequality would look like if union density had remained at its 1973 level. So what did they find? Answer: Among men, if you account only for the effect of individual membership in unions, it would be about a fifth lower, which agrees pretty well with previous estimates. But if you also account for the effect of unions on surrounding nonunion employers (who often raised wages to compete with union employers and to avert the threat of unionization in their own workplace), the effect is larger: Unionization at 1973 levels would decrease income inequality by a full third. You can see this in the chart below. For intragroup differences (which account for nearly the entire effect of unionization) the top line shows the actual rise of income inequality since 1973, while the red line is a prediction of what it would look like if union density were still at 1973 levels: 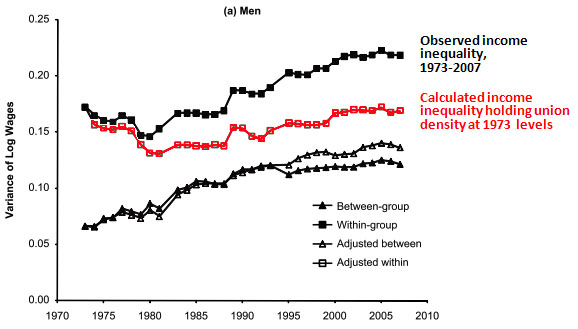 The effect of unionization on women is less dramatic because women were never unionized at the same rate as men. For them, increasing returns to education are a bigger factor in rising income inequality than deunionization. For men, however, deunionization has had a huge impact: “The decline of the US labor movement has added as much to men’s wage inequality as has the relative increase in pay for college graduates,” the authors say.

Western and Rosenfeld’s explanation for this is similar to Jacob Hacker and Paul Pierson’s in Winner-Take-All Politics, last year’s best book on modern political economy. Roughly speaking, there’s a direct economic effect of unionization on wages, but there’s also an effect of unions on the political system that indirectly affects wages. Western and Rosenfeld put it like this:

[Our] analysis suggests that unions helped shape the allocation of wages not just for their members, but across the labor market. The decline of US labor and the associated increase in wage inequality signaled the deterioration of the labor market as a political institution.…The de-politicization of the US labor market appears self-reinforcing: as organized labor’s political power dissipates, economic interests in the labor market are dispersed and policymakers have fewer incentives to strengthen unions or otherwise equalize economic rewards.

…[Prior to 1973,] unions offered an alternative to an unbridled market logic, and this institutional alternative employed over a third of all male private sector workers. The social experience of organized labor bled into nonunion sectors, contributing to greater equality overall. As unions declined, not only did the logic of the market encroach on what had been the union sector, but the logic of the market deepened in the nonunion sector, too, contributing to the rise in wage inequality.

In other words, deunionization has allowed income inequality to rise partly because unions are negotiating wages for fewer people than they used to, and partly because unions no longer have the power to force the political system to pay attention to the needs of the middle class. But if income inequality has to be reduced in order for middle class wages to grow—and it does—and if robust middle class wages are a key driver of the liberal project—and they are—then we’re all in big trouble. Mass unionization is gone, and it’s not coming back. This means we still need something to take its place, and we still don’t have it. Until we do, the progressive movement will continue to tread water.