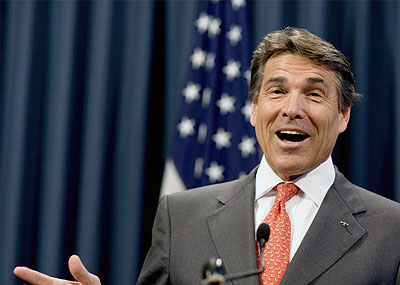 Not all of these qualify as gaffes, exactly, but considering that his campaign is only three days old, doesn’t it seem as if Rick Perry has been doing a pretty remarkable job of confirming his reputation as a Texas league chucklehead?

On a federal rule that doesn’t actually exist: “If you’re a tractor driver, if you drive your tractor across a public road, you’re gonna have to have a commercial driver’s license. Now how idiotic is that? What were they thinkin’?”

On the possibility of Ben Bernanke helping the economic recovery via looser monetary policy: “If this guy prints more money between now and the election, I dunno what y’all would do to him in Iowa but we would treat him pretty ugly down in Texas. Printing more money to play politics at this particular time in history is almost treasonous in my opinion.”

On Obama’s love of country: At a Republican Party event Monday night, a reporter asked Perry whether he was suggesting that President Obama does not love America. “You need to ask him,” Perry responded. “I’m saying, you’re a good reporter, go ask him”

On drone aircraft that have been used to patrol Texas borders for the past six years: “I mean, we know that there are Predator drones being flown for practice every day because we’re seeing them….Why not be flying those missions and using (that) real-time information to help our law-enforcement? Because if we will commit to that, I will suggest to you that we will be able to drive the drug cartels away from our border.”

On military unease with a civilian commander-in-chief: “I think they would really like to see a person who wore a uniform in that office and I think that’s just a true statement….Experience matters, having walked in a person’s shoes, having done what these young men and women in the military are doing matters to them. I don’t want somebody sitting in the front left seat of that airliner who just got their pilot’s license.”

This list probably isn’t complete. They’re just the ones I remembered off the top of my head. All in three days!