LA Weekly’s Jonathan Gold has some advice about tipping:

Tip 20 percent. Every time. Pre-tax? Post-tax? In practice the difference is no more than a buck or two….Yes, I know your parents still talk about when the recommended percentage used to be 15 percent, and that the practice is considered barbaric in Japan. But it’s not 1973, and you’re probably not in Osaka at the moment. 20 percent. 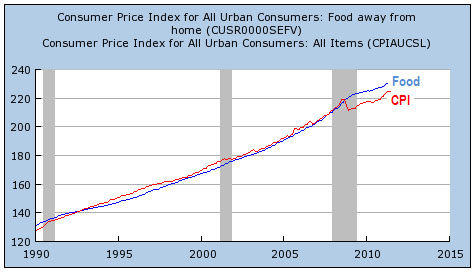 I figure this is something readers might know something about, so: When did this change? After 1973, apparently, but that’s a little vague. And why? Do food servers make less in ordinary wages than they used to? I don’t think that’s the case, though I might be wrong. And just generally, tipping seems like it’s perfectly designed to keep up with the cost of living. And it has: To geek out about this a bit, the chart on the right shows headline inflation vs. the inflation rate for “food away from home.” There’s a slight divergence during the recent recession, but that’s it. Overall, the rate has been pretty much the same. Restaurant bills have gone up as much as everything else.

Anyway, I’m not trying to campaign for stingier tips for food servers. I’m fine with 20 percent, and it’s certainly easier to calculate. But I’m trying to distract myself from the grim political news of late and just sort of curious about when and why the recommended practice changed. Or is Jonathan Gold wrong?