Several people today, after combing through Rick Perry’s book, have noted his peculiar dislike of the 17th Amendment. In case you’re a little fuzzy on which amendment is which, this is not the one that implemented the income tax. It’s the one that mandated the direct election of senators, instead of having them appointed by state legislatures. That’s right: Perry is opposed to electing senators.

At this point you’re probably shaking your head. Where the hell did that come from? Answer: as I learned while I was researching my piece on the tea party last year, it 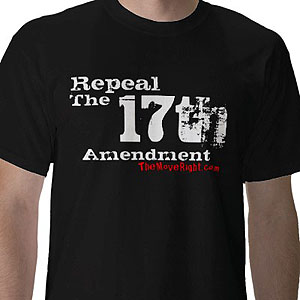 has a long pedigree. Here is Robert Welch, founder of the John Birch Society, writing in 1966 about the Master Conspiracy threatening the United States and the world:

The direct election of senators was of tremendously more importance than was realized when the Seventeenth Amendment was adopted in 1913. For as long as the senators for any state had been elected by the legislature of that state, they clearly represented the state itself as a sovereign entity within a federal union, and not just the citizens of the United States within certain boundaries….The Insiders, however wanted gradually and eventually to bring a concentration of all governmental power into the hands of the executive department of one central government. And the direct election of senators was actually their first huge legalistic step in that direction.

I don’t know if there was an anti-17th Amendment movement prior to Welch. I’m not aware of one. But at the very least, it was a mainstay of the John Birch Society as far back as the 60s and it’s popped up periodically on the fringe of movement conservatism ever since. In the 80s, W. Cleon Skousen, a big early influence on the JBS and later a big influence on Glenn Beck, began pitching repeal of the 17th Amendment again, and a few years after that Ron Paul took up the banner. Former Sen. Zell Miller of Georgia introduced a bill in 2004 to repeal the amendment, and in 2009 repeal became a talking point among the tea party crowd. Now Rick Perry is on board.