Here’s the latest on our return to the moon:

The rocket and capsule that NASA is proposing to return astronauts to the moon would fly just twice in the next 10 years and cost as much as $38 billion, according to internal NASA documents obtained by the Orlando Sentinel….That timeline and price tag could pose serious problems for supporters of the new spacecraft, which is being 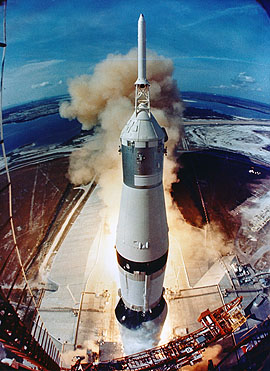 built from recycled parts of the shuttle and the now-defunct Constellation moon program. It effectively means that it will take the U.S. manned-space program more than 50 years — if ever — to duplicate its 1969 landing on the moon.

That is certain to infuriate NASA supporters in Congress….blah blah blah.

Well, hell, is this really a shocker? There are reasons to think that a moon program today should cost less than the original: we know a lot more about building rockets, we have better design technology, we have far better computers and access to lighter-weight components, and so forth. Still, that only provides a modest benefit, and in the end you still have to put together a massive program to build a brand new space vehicle pretty much from scratch. CBO estimated years ago that the Apollo program cost $100 billion in current dollars just for the R&D and management alone, and another $70 billion to build the dozen or so launchers and lunar modules. Given that, why should anyone be surprised that $38 billion is a shoestring budget that will barely fund two flyby missions?

The truth is that a new moon program will probably cost something on the order of $100 billion or more. Personally, I don’t think it’s a good use of money, but your mileage may vary on that score. Whatever you happen to think of it, though, that’s how much you need to count on spending if you want a real program. There’s no point in continually being shocked when it turns out that NASA can’t really do much of anything for less than half of what it actually needs.