In the LA Times today, Jerry Hirsch digs into the Commerce Department’s report that orders for autos and auto parts rose 11.5% in July, the most in eight years:

After a massive restructuring and several high-profile bankruptcies, a leaner, more aggressive auto industry is making a comeback, hiring workers and ramping up manufacturing plants. From a trough two years ago, Ford Motor Co., General Motors Co., Chrysler Group and other auto companies 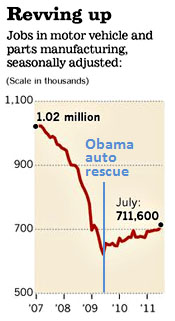 have added almost 90,000 manufacturing jobs, a 14% increase, according to federal employment data.

….Dealers are having a banner year, making more money per sale than they have in years and hiring back some workers shed during the recession. “I have been adding dozens of employees for sales and sales support,” said Mike Bowsher, who owns Chevrolet and Buick dealerships in Atlanta; Nashville, Tenn.; and Orlando, Fla. “The economy is crazy, but our retail business is still growing and getting better.”

….Auto sales peaked at about 17 million in 2000 and held near that level until 2007 before crashing to just 10.4 million two years later. They were heading back into the 13-million range — helped by a wave of new models, low interest rates and improving consumer confidence — only to be upended by the Japanese earthquake in March….”If you see a 13-million-unit sales rate in the fourth quarter, that would help a lot,” said Shulman, senior economist at the UCLA Anderson Forecast. “It would be very hard to see how the U.S. would go into recession with cars selling at that rate.”

Some of the immediate rebound is due to pent-up demand following the Japanese tsunami, but in general it seems like a fairly durable response to an aging auto fleet. And it’s benefiting American employment due in large part to the Obama administration’s surprisingly agile rescue of GM and Chrysler. Taken as a whole, it probably saved upwards of a million jobs economy-wide. You can throw this into the mix with Medicare cost control and higher CAFE standards for cars and light trucks as things that Obama doesn’t get enough credit for.