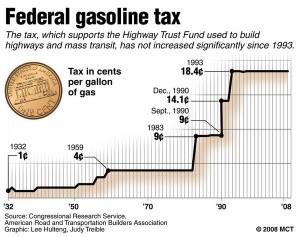 I’ve been assuming that the next big fight in Washington will be over the 2012 budget, but apparently all the Beltway gossip is now focused on something else: a vote to reauthorize the federal gasoline tax next month. Doug Mataconis mulls this over:

You can already see how this issue could play itself out a month from now. As it is the issue of increased energy prices is an easy one to demagouge with simplistic slogans (“Drill Baby Drill”) and even more simplistic ideas (anyone remember when Hillary Clinton and John McCain came up with the idiotic idea of a Federal Gas Tax Holiday during the 2008 campaign?). It’s not at all hard to see the argument over the the gas tax being boiled down to the slogan Barack Obama wants to increase the price of gas.

….There are, in fact, some remarkable similarities between the just concluded debt ceiling showdown and the showdown that could result over increasing the gas tax. Like increasing the debt ceiling, the renewal of the Federal Gasoline Tax has been a fairly non-controversial action in the past. Ronald Reagan did it in 1982, George H.W. Bush did it in 1990, Bill Clinton did it in 1993, and George W. Bush and a Republican Congress did it in 2005. Additionally, attempts to roll back the tax in the past have generally failed.

I know it’s dangerous to assume that something won’t happen just because it makes no sense, but…..I don’t think this fight will happen. This isn’t because the anti-tax jihadists will suddenly have an outbreak of common sense, but because a gas tax fight won’t fly with the public. It’s easy to demagogue “taxes,” since lots of people are convinced that “taxes” are merely ladled out to favored interest groups, wasteful boondoggles, foreign aid, and the layabout poor. But gasoline taxes are different: they’re used to build highways. And everyone likes highways.

Generally speaking, people don’t object to taxes if they see tangible results from them. And highways are about as tangible as you can get. The Republican leadership is smart enough to pick fights that have a certain amount of surface appeal, and this one doesn’t, not even to the hardcore tea party crowd. They’ll find something else to fight about.