Over at FiveThirtyEight, Bryan McCabe takes on the mortgage interest deduction:

Commentators often talk about the mortgage interest deduction as a prized middle-class benefit that enables households to achieve the American dream of homeownership. But despite their strong support for the deduction, middle-class Americans are not the primary beneficiaries of this federal tax subsidy. Instead, wealthy Americans take home a disproportionate share of the deduction’s benefits.

I think this is a lot less mysterious than McCabe makes it out to be. It’s true that high-income taxpayers get a bigger absolute benefit from the mortgage interest deduction than low-income taxpayers. Of course they do: they have bigger mortgages. But I’ve added a column to the JCT report that produced the numbers McCabe uses in his post. The extra column shows roughly how big the mortgage interest deduction is as a percentage of income at various levels: 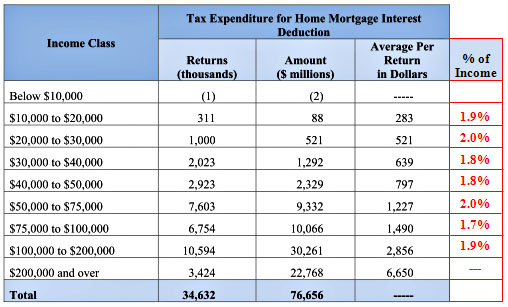 As you can see, it comes to about 2% of income for everyone. (I used the midpoint of each income group for the calculation. The top income group is blank because “average” income is a little tricky to compute for this group.) What’s more, although homeownership rates are obviously higher at higher income levels, the homeownership rate is 60% even at incomes as low as $25,000.

So why is the mortgage interest deduction so popular? Because homeownership is pretty widespread even at low incomes and the amount of the deduction is about the same for everyone as a percentage of income. $283 may not seem like much, but to someone with an income of $10-20,000, it’s as valuable as $2,856 is to someone with an income of $100-200,000. Result: everyone loves the mortgage interest deduction.