Greg Sargent rounds up some evidence today that the tide of public opinion is finally shifting on the debt ceiling. This doesn’t surprise me. It’s easy to casually say “hey, maybe we should just default and see what happens,” as a friend of mine did on July 4th, but it gets a lot harder to say that when more and more people start speaking 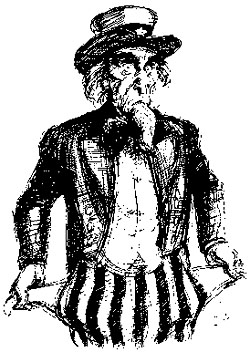 up and explaining exactly what would happen. For a while that wasn’t happening because, as Stan Collender says:

On the one hand, much of Wall Street is insisting that the whole fight is political theater and that Congress and the White house will work something out. On the other hand, congressional Republicans are insisting that Wall Street won’t react negatively if a deal doesn’t get done. In other words, financial markets aren’t yet reacting because they think a deal is in the offing and the GOP isn’t cutting a deal because it doesn’t think Wall Street cares.

Of course, that’s not the only reason the GOP isn’t cutting a deal. Jon Chait points today to an example of one of my pet peeves, the “politicians in Washington” dodge. When news outlets report that “the Senate” did something or that “politicians” are in denial, they mask who’s really responsible. William Cohan did that today in a column about the debt ceiling fight, and Chait ain’t happy about it:

But now Wall Street is finally reacting and (most) reporters are finally telling the story pretty straight: gambling with the debt ceiling is really dangerous and it’s the GOP that has its fingers on the button. Put all this together, and even Republicans in the heartland are starting to figure out that screwing around with the financial integrity of the country is a little more serious than filibustering a judge or holding symbolic votes on abortion funding. As we get closer to August 2nd, and the consequences become even clearer, I expect the polls to continue shifting. After all, Armageddon only looks interesting from a distance.