God only knows what offers Obama really made to John Boehner last week and what offers Boehner might have been willing to accept. Reporting is all over the map on this. Like nearly every liberal, though, I’m pretty stunned by White House confirmation that Obama offered to raise the Medicare eligibility age to 67 — a truly terrible idea that wouldn’t even save very much money. If this is true, it means either (a) Obama really is willing to sell out the left almost completely, or (b) he’s trying to demonstrate how completely instransigent Republicans are. I can’t even guess which at this point. Maybe both.

Frankly, though, the endless “inside” reporting of offers and counteroffers isn’t very interesting any more. I think we’ve seen pretty much every permutation possible. Details aside, what’s obvious is that Obama is willing to concede a helluva lot while a big chunk of Republicans are not only unwilling to concede anything, but think it would be great to just go ahead and default. So what if the economy 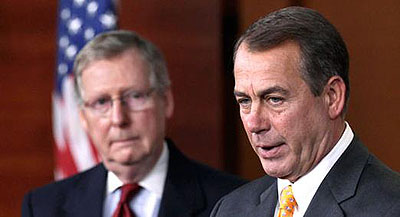 goes kablooey? It’ll help defeat Obama! And anyway, it’s only a bunch of long-haired economists saying so, and they’re probably just making stuff up, the same as the long-haired climate scientists and the long-haired biologists.

But here’s what I am curious about. Up until very recently, Republicans were mostly taking a hard line on the deficit and weren’t shy about making sure everyone knew it. The hard line itself hasn’t changed since then, but over the past few weeks they’ve come to realize that it doesn’t make for very good PR. So now their enablers in the media are furiously pushing the story that it’s really Obama who’s completely intransigent and insincere, rejecting deal after deal no matter how much Republicans try to accomodate his crazed desire to punish the rich. This narrative, as near as I can tell, is now virtually unanimous among conservative commenters.

So the question is, will anyone buy this? It’s so self-evidently preposterous that it doesn’t seem possible, but then, I wouldn’t have figured that they could successfully make the world so quickly forget that they were responsible for the deficit in the first place, nor that they were also responsible for the most epic financial meltdown since the Great Depression. But they have. Their ability to shape popular narratives can hardly be overestimated.

Even now, House Republicans are apparently readying a plan that appears to have no purpose except to be so obviously outlandish that it will get rejected out of hand, thus helping their storyline. Conservative pundits will spin it in lockstep as yet another example of Obama’s obduracy, and the rest of the media will…..

What? Slowly buy into it? I don’t know. The American press, as long as it’s bound by its usual standard of objectivity, just isn’t set up to deal with a two-party system in which one of the parties has gone completely off the rails. So we’ll see. They might yet pull it off.