When John Boehner said earlier today that the debt ceiling was 100% Obama’s problem, I took it as political hyperbole. But apparently it was much more than that. A couple of hours ago Boehner’s Senate doppelganger, Mitch McConnell, 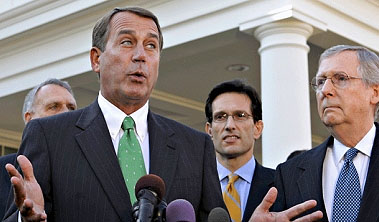 proposed a truly bizarre plan that would, literally, make the debt ceiling 100 percent Obama’s problem. It goes like this:

WTF? This is possibly the most juvenile, most buck passing, most transparently mendacious proposal I can recall from any party leader in recent memory. The bright idea here is to force Democrats to repeatedly vote to raise the debt ceiling during campaign season, and to repeatedly force Obama to lay out enormous budget cuts that have no purpose except to piss off interest groups. The whole thing is so patently, ridiculously political that it’s breathtaking. It ought to be named the “Gratuitous Embarrassment of Barack Obama and the Democratic Party Act of 2011.”

Does McConnell really think that he’s being clever here? That his purpose isn’t plain to everyone? The Republican Party has now passed from Alice in Wonderland to Lord of the Flies. It’s like dealing with a bunch of kids on a playground. Are McConnell and Boehner trying to prove Obama’s point that he’s the only adult at the table right now?

1No insult to actual sixth-graders intended.