The strange conservative jihad against energy efficient light bulbs continues today. Higher efficiency standards were mandated by the Energy Independence and Security Act of 2007, a bill passed by massive majorities in Congress and signed into law by President George W. Bush, but no matter. The Rush 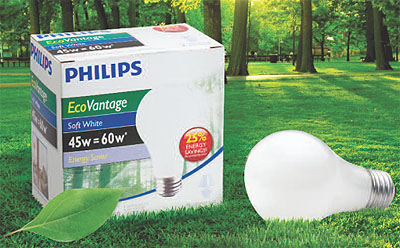 Limbaugh crowd has turned it into a poster child for socialism run amok, and repealing it is now a top priority among among the tea party crowd. Here’s Stephen Moore in the Wall Street Journal today:

The light bulb ban was part of the 2007 energy bill. It will outlaw the sale of traditional 100 watt bulbs starting in 2012. Many Americans dislike the new fluorescent bulbs, which give off less heat and are more energy efficient, because they don’t like the quality of the lighting.

It’s not just Philips making these bulbs. GE and Sylvania are also producing new, energy-efficient incandescents using the same technology. And by 2014, consumers will not be forced to buy more expensive LEDs or moderately

priced CFLs — they’ll be able to buy incandescent bulbs that today cost $1.42 and use 27% less energy.

The table on the right shows the new standards. (Details here.) Basically, the new bulbs produce the equivalent of 100 watts of light output using only 72 watts, the equivalent of 75 watts using only 53 watts, etc. And they’re still incandescent, and they still provide the same kind of light you’re used to. If you don’t like CFLs, you’re free to continue not to use them.

Repeal of the EISA standards failed earlier this week, but the tea partiers aren’t giving up. It just passed on a voice vote in the House as an amendment to an appropriations bill, all based on the myth that incandescent bulbs have been banned and you’d better stockpile them quick before the EPA jackboots march into your local hardware store and haul them all away. But it’s not true. You can still buy incandescent bulbs. They’ll just be more energy efficient.