“Tax expenditures” are special deductions, exclusions, exemptions, and credits in the tax code — basically ways of spending money by reducing taxes instead of directly funding a federal program. In the current issue of the Washington Monthly, Suzanne Mettler says we should cut them way back:

The broader goals of progressive politics are undermined by tax expenditures. Reducing them is a goal we should embrace. The problems start with their redistributive impact.

Most Americans assume that U.S. government social programs aid primarily the poor and the middle class, but tax expenditures generally shower their most generous benefits on those in the upper reaches of the income spectrum. To be sure, there are exceptions—most notably the EITC, which genuinely aids the working poor, and Clinton’s HOPE credit, which targeted the middle class. But in the main, such policies are upwardly redistributive, despite rhetoric to the contrary….In 2004, 69 percent of the benefits of America’s home mortgage interest deduction were claimed by households with incomes of $100,000 or above—the top 15 percent of the income distribution. That same group also reaped 55 percent of the benefits emanating from the tax-free status of retirement benefits and 30 percent of those from employer-provided health benefits.

OK, I’m sold. For the most part, tax expenditures are lousy policy, they hide the actual size of government programs, they’re poorly targeted, and they create intractable political problems. Still, you know what I’d like to understand first? Just how big a problem are they? Here are three different estimates:

I’m guessing that the CRS numbers are pretty reliable, and their recent report includes a chart that shows the entire tax expenditure picture instead of cherry picking just a couple of years. Here it is: 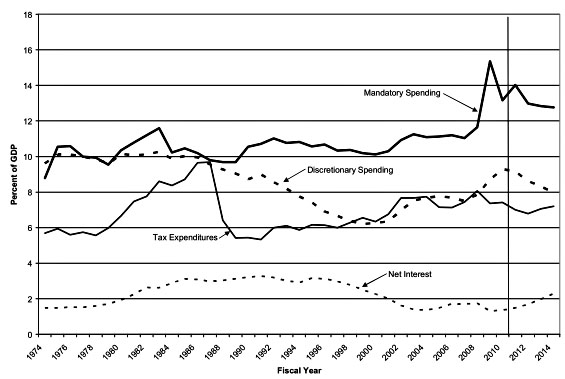 Like I said, I think there are lots of good reasons to reduce tax expenditures. At the same time, this chart doesn’t really suggest that they’re some kind of skyrocketing, out-of-control problem. There was a big rise in tax expenditures in the early 80s that was reined in by the 1986 Tax Reform Act, and aside from that temporary bump they’ve held pretty steady for the past four decades aside from a modest increase as a result of the two Bush tax cuts. If we just let the Bush tax cuts expire, we’d be back to 1974 levels.

So go ahead and whack ’em. But take with a grain of salt any suggestion that tax expenditures have been soaring in recent decades. Most of the big ones have been around since World War II or longer and they’ve been hanging around ever since.