Earlier this week Britain announced that economic growth in the second quarter was an anemic 0.2%, within a hair’s breadth of re-entering recession territory. But what about the rest of Europe? Today Edward Hugh passes along the latest Purchasing Managers Index figures for the Eurozone, a statistic that generally suggests the economy is expanding when it’s above 50 and contracting when it’s below 50. It’s been dropping steadily for the past quarter, and in July registered just 50.8: 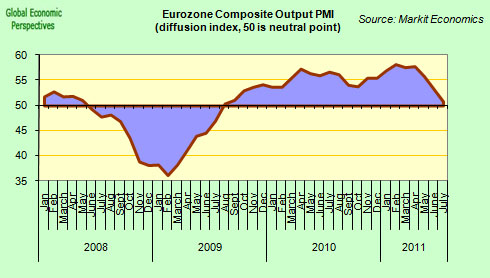 Outside of France and Germany, which are still expanding, though slowly, the rest of Europe is already below 50. “Even as growth in the core economies approaches stall speed, out on the periphery a new recession seems increasingly on the cards, and most importantly in countries like Spain and Italy which have so far managed to keep their heads just above the waterline. Growth in the second quarter of the year looks likely to have been minimal in both cases, and the outlook for the third quarter suggests we are entering a bout of economic shrinkage.”

Click the link for the rest. Economic growth is slowing all over the world as we fiddle around with our insane, politically motivated debt ceiling fight. A double dip recession might still not be the betting choice, but it’s hardly out of the question anymore.