CMS is a government agency that has long offended my OCD sensibilities because it stands for Centers for Medicare & Medicaid Services and really ought to be called CMMS. But today I’ll link to them anyway. They’ve completed a new projection for total national health expenditures through 2020, and it’s shown in the chart on the right. The green line shows the old projection and the red line shows the new projection after passage of the 2009 healthcare reform act. Basically, they 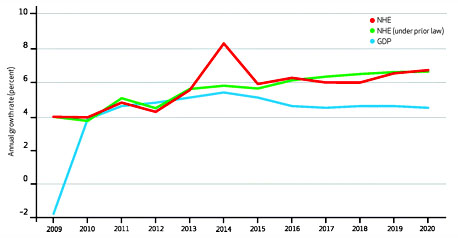 expect a one-year spike in spending growth in 2014, when most of the law takes effect, followed by slightly lower growth for most of the rest of the decade.

So how does that work out? For the decade as a whole, CMS projected an annual growth rate of 5.7% pre-reform compared to 5.8% post-reform. To put that into dollars, it means that in 2020 our total spending on healthcare will be about $40 billion higher than it would have been without healthcare reform. So what do we get for that money?

In 2014, the Affordable Care Act will greatly expand access to insurance coverage, mainly through Medicaid and new state health insurance exchanges which will facilitate the purchase of insurance. The result will be an estimated 22.9 million newly insured people.

….Out-of-pocket spending is projected to decline by 1.3 percent as the number of people with insurance coverage increases and many services formerly paid for out of pocket are now covered by insurance….The newly insured are expected to consume more prescriptions because of substantially lower out-of-pocket requirements for prescription drugs.

Not bad for only $40 billion! 23 million more people will be covered, out-of-pocket spending will decline, and prescription drugs will be more widely available. All for less than $2,000 per person, which is a considerable bargain.

The White House, of course, thinks that ACA will reduce costs more than CMS suggests. You can read their argument here. But even if it doesn’t, CMS is projecting a mighty small price for something that’s going to benefit so many.