In honor of Wimbledon starting today, Patrick Hruby writes a piece that’s become an annual tradition around this time of year: a plaint about the death of the serve-and-volley game among top tennis stars:

In part, serve-and-volley became a victim of its own success. By the mid-1990s, big-serving attackers—again, see Sampras—were winning points and games in bang-bang fashion, producing complaints of boring, monotonous tennis. The griping had merit: bereft of long rallies, 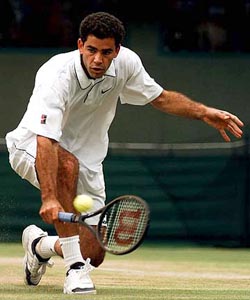 matches between net-rushers lacked both flow and consistent action, reducing a game of ebb, flow and varied geometry to a soccer penalty shootout.

In response, courts were tweaked to make balls bounce slower and higher. Wimbledon, for instance, altered the composition of its grass in 2001, producing a firmer and more durable playing surface. This shifted the balance of power in the direction of baseliners, giving them valuable extra time—think a tenth of a second, which is all they needed—to line up returns and passing shots. In 2002, net-rusher Tim Henman complained that the All England grass was the slowest non-clay surface he had played on all season; six years later, a BBC broadcast compared a pair of Federer serves to show that the courts had become even slower. The first Federer serve was hit in 2003; the second in 2008. Both were clocked at 126 miles per hour. The latter serve bounced higher, and came off the grass travelling nine mph slower.

New racket technology also favors the power baseline game, and the result is that today just about everyone plays the exact same, boring style of tennis: an endless parade of huge, looping, topspin shots from five or ten feet beyond the baseline. Athletically, it’s stupendous, but dramatically it’s tedious. It’s here to stay, though. One of these days John McEnroe will retire from broadcasting and we’ll no longer have anyone to tell us once an hour or so that whoever we’re watching at the moment would benefit from coming to the net more aggressively, at which point the serve-and-volley game will be such a distant memory that no one will even write the annual Wimbledon requiem any longer. It’ll just be something to reminisce about at the old folks home.