Did we go to war in Libya over oil? Glenn Greenwald makes the case here. As usual, I’d say the right answer is “sorta.” I doubt very much that President Obama and his trusted advisors sat around a table in March and talked about how the growing unrest in the Middle East was a great opportunity to seize a few oil fields in Libya. On the other hand, would we give a rat’s ass about the rebels in Libya if 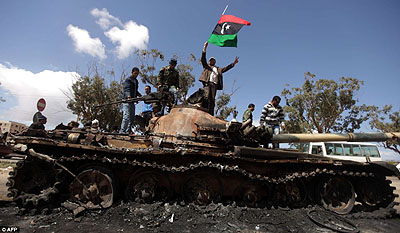 there were no oil there — or if it were under the control of a friendly autocrat instead of an unreliable one like Muammar Gaddafi? The question pretty much answers itself.

But Glenn points out something else interesting: the Washington Post ran a story on A9 today under the soporific headline “Oil firms wait out Libya conflict” that spells out just how upset U.S. oil companies have been with Libya’s increasingly truculent attitude over the past few years. And pretty much the entire source for the piece was the cache of diplomatic cables released last year by WikiLeaks. Here’s a sample in the order they show up in the story:

In late February 2008, [ConocoPhillips chief executive Jim Mulva] was “summoned to Sirte for a half-hour ‘browbeating’?” from Gaddafi, according to a U.S. State Department cable made available by WikiLeaks….A State Department cable in December 2004 said, “Conoco characterized the agreement as ‘not good,’ but said the company views it as ‘dues-paying’ in order to return to the Libyan market.”….By the time Secretary of State Condoleezza Rice visited in 2008, U.S. joint ventures accounted for 510,000 of Libya’s 1.7 million barrels a day of production, a State Department cable said.

By November 2007, a State Department cable noted “growing evidence of Libyan resource nationalism.”….The Libyan leader was livid, evident in his scolding of Mulva. The equivalent of the deputy foreign minister told U.S. officials that the Lautenberg amendment was “destroying everything the two sides have built since 2003,” according to a State Department cable at the time….The U.S.-educated Libyan oil minister Shokri Ghanem — who recently left Libya and defected from the Gaddafi regime — in 2008 warned an Exxon Mobil executive that Libya might “significantly curtail” its oil production to “penalize the U.S.,” according to a State Department cable.

Was oil a significant factor in the eagerness of France, Britain, and the U.S. to go to war with Libya? It’s impossible to say for sure. But thanks to WikiLeaks, we certainly know that Libyan oil had been on a lot of minds in the months and years beforehand.