As I’ve mentioned before, Grover Norquist’s anti-tax pledge — signed in blood by virtually every Republican member of Congress — is really more of an anti-revenue pledge. Norquist believes in small 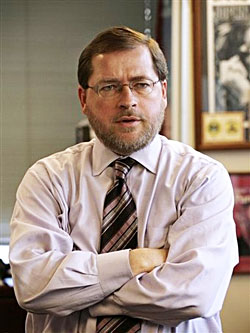 government, so he opposes anything that increases government revenue. This means that if there’s some kind of tax loophole or tax credit in the law, he’s opposed to repealing it since that would effectively raise tax revenue.

Yesterday, the Senate voted on a bill by Tom Coburn that would eliminate the ethanol subsidy. Norquist opposed it for the usual reasons, but most Senate Republicans voted for it. It’s a Norquist revolt!

Grover Norquist’s grip on the Republican Party’s tax policy slipped dramatically on Tuesday, a development that is likely to have significant repercussions on the debate over spending, revenue and the federal deficit….Norquist has been vicious in his recent talks on Coburn, charging that his amendment means he “lied his way into office” and is breaking the pledge.

….Late on Friday, as it became increasingly clear the Republican conference was shifting toward Coburn, Norquist performed a bit of legislative gymnastics, releasing a statement saying that it was okay to support the Coburn amendment — the same measure he’d savaged for weeks — as long as Coburn also supported an amendment from Sen. Jim DeMint (R-S.C.) that would cut the estate tax and repeal ethanol subsidies.

Wait a second.  Was this bundling maneuver just a last-minute trick on Norquist’s part to save face? To some extent, sure. But it basically sounds to me like classic Grover: he’s opposed to net tax increases, not all tax increases. As long as you support an overall decrease in taxes, it’s OK if there are individual tax components that are increased. But a bunch of senators saw Norquist’s change of heart differently:

That enraged several Republican opponents of Coburn’s plan, who believed that Norquist was simply giving political cover to senators who want it both ways on the issue: They wanted to vote to eliminate what they see as unnecessary ethanol subsidies but not be accused of raising taxes….The fight came to a boil at a closed-door meeting of several GOP senators Tuesday morning on Capitol Hill, with Norquist’s supporters saying they needed to maintain the arrangement to prevent accusations of breaking the party’s anti-tax orthodoxy, several attendees said. But others were not convinced.

“This is a tremendous amount of gymnastics to try to get the pledge to fit so they can say that this amendment is OK,” said Sen. John Thune of South Dakota….Sen. Chuck Grassley (R-Iowa), one of ethanol’s biggest proponents, said “there is a certain inconsistency because there are two separate votes.”

We’ll see. The theory here is that having once voted to end a tax expenditure (the ethanol subsidy), Republicans will now be more willing to defy Norquist and vote to end other, bigger tax expenditures (mortgage interest, employer healthcare contributions). I have my doubts about that. Sen. Jon Kyl of Arizona may have voted for the Coburn amendment, but he’s also adamant that revenue increases remain off-limits in the debt ceiling talks. This vote has produced a lot of over-the-top rhetoric and frayed tempers, but in the end I suspect it doesn’t mean much. Republicans remain just as firmly anti-tax in all its incarnations as they’ve ever been. Especially with an election coming up.