This is a fascinating story:

In 1979, the state of Haryana created Gurgaon by dividing a longstanding political district on the outskirts of New Delhi. One half would revolve around the city of Faridabad, which had an active municipal government, direct rail access to the capital, fertile farmland and a strong industrial base. The other half, Gurgaon, had rocky soil, no local government, no railway link and almost no industrial base.

As an economic competition, it seemed an unfair fight. And it has been: Gurgaon has won, easily. Faridabad has struggled to catch India’s modernization wave, while Gurgaon’s disadvantages 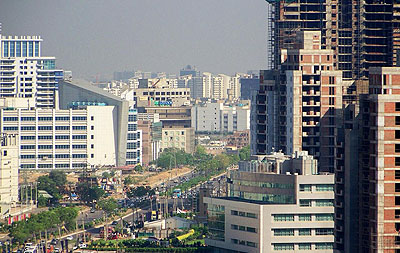 turned out to be advantages, none more important, initially, than the absence of a districtwide government, which meant less red tape capable of choking development.

Basically, Gurgaon has turned into something from a dystopian science fiction novel: an archipelago of self-contained corporate mini-cities that provide their own power, water, sewage, transit, postal service, schools, medical care, and security force. Meanwhile, everything in between is no man’s land. And growth has been spectacular.

In a sense, it’s not surprising that this works relatively well. Given a free hand, corporations have successfully built plenty of company towns in the past that thrived because they had to take care of only their own needs and never had to chip in to provide for the wider common welfare too. Taking care of the poor is always a pain in the ass, after all. It’s also true that Indian municipal government is so legendarily corrupt and inefficient that this is something of a destruction test of the idea of bypassing central government regulation of infrastructure. Whether you’re liberal or conservative, you’d be wise not to try to draw too many lessons for the United States from Gurgaon.

Still: pretty fascinating, and on a pure planning level there probably are some interesting lessons to be learned. Urbanists should all feel free to chime in.

Via Alex Tabarrok, who has some interesting comments.