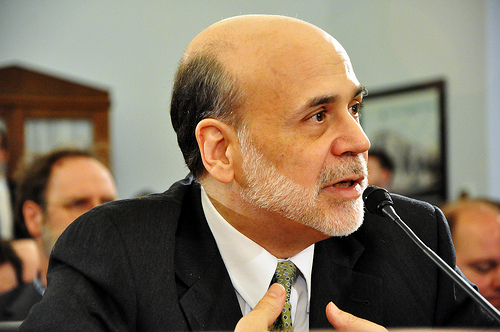 The nation’s central bank said Wednesday that it would complete the planned purchase of $600 billion in Treasury securities next week as scheduled, and then suspend its three-year-old economic rescue campaign, leaving in place the aid it already is providing but doing nothing more, for now, to bolster growth.

“The economic recovery is continuing at a moderate pace, though somewhat more slowly than the committee had expected,” the Fed said in a statement. “The committee expects the pace of recovery to pick up over coming quarters and the unemployment rate to resume its gradual decline.”

The statement offered hope that the pace of growth would increase, noting that many factors restraining the economy are likely to be temporary, including the impact of higher energy prices and the disruptions to manufacturing caused by the Japanese earthquake. Automakers already are planning sharp increases in production to compensate for the lost volume.

So that’s it. Apart from sticking with rock-bottom interest rates, the Fed is turning to a hope-and-wait strategy to see if economic growth, job creation, and consumer spending pick up in the coming months. Thanks a lot, Ben Bernanke.

Ezra Klein nailed it this morning on the Fed’s failure to fulfill its mission and spark a stronger, faster economic recovery:

[The Fed’s efforts have had] a modest impact on the worst economy since the Great Depression. The anger at the Fed isn’t coming because people have suddenly developed strong and nuanced views on quantitative easing. It’s coming because people are angry about the state of the economy, and the Fed is one of the major forces in the economy. The way to have avoided it wouldn’t have been to do less, but to do better, which would’ve meant doing more.

A growing number of economic policymakers—former Fed vice chairman Alan Blinder, former CEA chair Christina Romer, former associate director for the Fed’s monetary affairs division Joseph Gagnon—believe that would’ve been, and in many cases, still is, possible. They argue that the bank’s underwhelming impact on the recovery is evidence not of the Fed’s inability to more effectively fight the recession, but its unwillingness to do what was needed to fight the recession. Larger and more aggressive asset purchases, price-level targeting, and various other dips into unconventional measures were and are needed. But all that would’ve been economically more effective and politically easier a year ago, or even two years ago, than it is today. Today, the Fed is under intense criticism, which limits its freedom of action. Having not done enough, they’re now unable to do more.