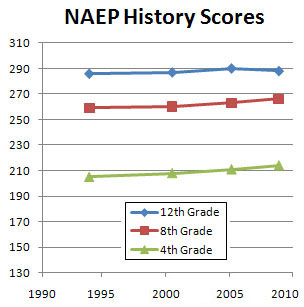 The latest NAEP scores are out showing how much our schoolkids know about U.S. history. Results from the past 16 years for three different grade levels are on the right. Quick: what’s your reaction?

American students are less proficient in their nation’s history than in any other subject, according to results of a nationwide test released on Tuesday….Over all, 20 percent of fourth graders, 17 percent of eighth graders and 12 percent of high school seniors demonstrated proficiency on the exam.

….Fewer than a third of eighth graders could answer even a “seemingly easy question” asking them to identify an important advantage American forces had over the British during the Revolution….Only 2 percent of 12th graders correctly answered a question concerning Brown v. Board of Education….“The answer was right in front of them,” [Education historian Diane] Ravitch said. “This is alarming.”

….If history is American students’ worst subject, economics is their best: 42 percent of high school seniors were deemed proficient in the 2006 economics test, a larger proportion than in any other subject over the last decade.

Something smells wrong here on a variety of counts:

I’m just not sure what to think here. It’s obvious that American schoolkids aren’t getting any worse at history. It’s also clear that the history profession has a very high bar for what it considers minimal proficiency in U.S. history. Beyond that, I’m not sure what these results tell us.