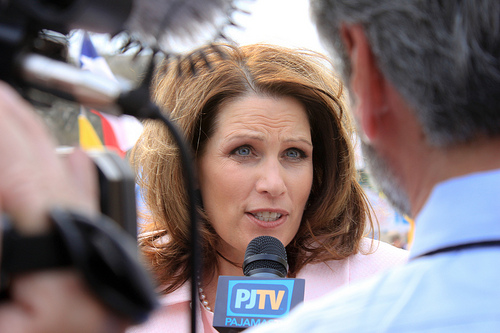 Rep. Michele Bachmann (R-Minn.) has had quite a run lately. She had strong showings at the June 13 CNN debate and the Republican Leadership Conference 10 days ago. Then came this weekend’s shocking Des Moines Register poll putting Bachmann in second place with 22 percent, a single percentage point behind front-runner Mitt Romney.

Today a buoyant Bachmann unveiled (again) her presidential campaign, this time in her hometown of Waterloo, Iowa. But Nate Silver warns against getting too excited amidst all the Michele mania and buzz surrounding her campaign:

Consider Jonathan Bernstein’s reminder about the first Iowa Poll in the last election cycle, which was published in May, 2007. In that survey, Mitt Romney—who eventually finished second in Iowa—had 30 percent of the vote. In second and third place were John McCain (with 18 percent) and Rudy Giuliani (17 percent), who flopped there. The winner of the caucuses, Mike Huckabee, had 4 percent of the vote at this point in time—behind the likes of Tommy Thompson and Sam Brownback.

In other words, the horse race numbers need to be interpreted cautiously. Instead, I’d pay just as much attention to the impression that voters have of each candidate.

You have to dig down to find those numbers, but they are much better for Mr. Pawlenty: some 58 pecent of voters view him favorably, versus 13 percent unfavorably. The figures for Mr. Romney, by contrast, are 52 percent favorable but 38 percent unfavorable.

Put simply, there is considerable upside in Mr. Pawlenty’s numbers—and some downside for Mr. Romney, who is effectively competing for the votes of perhaps only 50 or 60 percent of the voters in the state because of his relatively moderate positions.

Election Day 2012 is 17 months away. The Iowa caucuses are six months out. No poll is all that important right now.