Jared Bernstein says that productivity growth is good for the economy and good for employment. At least, it used to be:

People sometimes worry that we’re getting too productive, able to satisfy the demands of our economy with “too few” workers. That’s an age-old worry, and those who want to downplay it cite the fact that, as the graph shows, there is a positive, not a negative, correlation between productivity and job growth overtime….But look at the end of the graph. Productivity 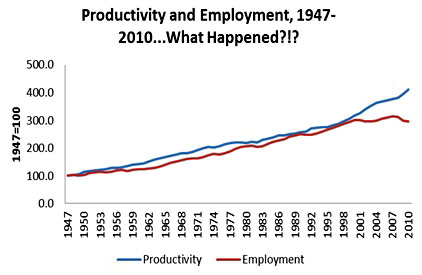 accelerates while employment growth decelerates. And that ain’t no blip either…it suggests the possibility of a structural change in this relationship.

This is a useful chart. As I mentioned Sunday morning, I don’t think there’s a big mystery about why unemployment is high right now: consumers are still deleveraging instead of buying stuff, so consumer demand is low and that means there’s no reason for businesses to invest or hire people.That’s 70% of the problem, anyway, and we could address that 70% with more aggressive monetary policy and/or more aggressive fiscal policy. Still, it seems plausible that there’s a chunk of the problem that might be more structural, and it’s not a problem that suddenly popped up a couple of years ago. It’s a problem that started a decade ago but was masked by the high fever of a housing bubble. And it means that either our productivity gains since then have been a mirage or else that productivity gains now leak out of the economy and no longer drive employment gains.

I don’t know which it is, and it certainly shouldn’t stop us from doing what we can to fix the current demand shortfall and get the economy back on track. But it’s something to think about for the future. If this breakdown is real, it has some real consequences for the next few decades.