Michael Grunwald, after observing that the Republican Party is increasingly untethered from reality, notes that there are now two kinds of GOP presidential candidates left, reality-based and wingnuts, and two possible outcomes for them, either beating Obama or losing to him. He then analyzes each possibility, which I’ve taken the liberty of converting into a sort of bastardized BCG matrix:

If Huntsman or Romney wins the nomination, and then Obama wins the election, the GOP will quickly shift from “loosely tethered to reality” to “out of its freaking mind.” Remember, after its crushing defeat in 2008, the party faithful concluded that John McCain lost the election because he wasn’t conservative enough—and that George W. Bush lost his popularity 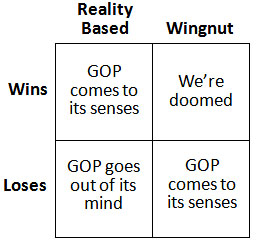 because of his big spending….A Huntsman or Romney defeat would just prove to the party that electoral salvation lies in ideological purity and rigid obstructionism, the kind of conclusion that already appeals to Tea Party activists who consider Obama some kind of tyrannical socialist usurper.

….On the other hand, if Huntsman or Romney wins the nomination and then beats Obama, the Republican Party might rediscover big-tent reality-based policies. (It’s also possible that Huntsman or especially Romney would cut reality loose.) Similarly, if a Tea Party true believer like Sarah Palin or even former Pennsylvania Senator Rick Santorum wins the nomination, and then Obama wins the election, the Republican Party might have a Goldwater moment where it starts to reconsider its small-tent extremism. (It’s also possible—maybe likely—that it would devise some excuse why Palin or Santorum had sold out conservatism.) And if a reality-denying extremist actually beats Obama, well, then we’re in trouble, because reality-denial isn’t going to fix the double-dip recession we must have had to make a reality-denier electable.

I endorse this pretty much completely. It’s not a sure thing, by any means, but these four scenarios do seem the most likely to me. If you rank the probability of each one happening and then multiply by the badness of the outcome, you can also make an informed decision about whether you hope Republicans nominate someone at least modestly reality-based.

I continue to hope that they nominate Michele Bachmann. From this, can you deduce the probabilities and badnesses I assign to each square?