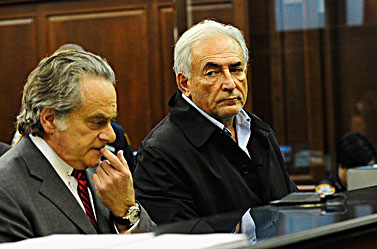 Sophie Meunier reports that after an initial stage of anger and America-bashing, French reaction to the arrest of Dominique Strauss-Kahn has started to turn:

With a few days hindsight, however, what is most surprising about the fallout of the DSK scandal in France is not how much, but rather how little displays of anti-Americanism it has provoked. To the contrary, the scandal is now turning into a teachable moment….What if the American justice system actually had some features that could be replicated, such as the equality of treatment? A flurry of accusatory articles popped up in the French press denouncing how a defendant of DSK’s stature would never have gone through the same legal troubles in France -unlike a random “Benoit” or “Karim.” As socialist and DSK friend Manuel Valls publicly confessed, criticizing the American justice system also puts the spotlight on the weaknesses of French justice. This realization that perhaps the Americans might have components in their justice system that should be replicated in France might have left many with the depressing thought — “maybe we are not as wonderful and superior as we thought: so what is now our place in the world?”

Many analysts, mostly women but not only, seized on the scandal to praise an American society where it is easy (read, easier than in France) to denounce sex crimes and violence against women.

As for the French media, they, too, quickly went into soul-searching mode. By refusing to report beyond the “bedroom door”, had they been complicit? Why doesn’t France have a tradition of investigative journalism? Should French reporters be importing best practices from their American counterparts? Ahhhh, acceptance.

I’d actually like to read an article about how DSK would likely have been treated in France if the accusations had been made there by a French housekeeper. Reading pieces like this one, I’ve gotten the consistent impression that the French judicial system would have treated him with kid gloves. But what exactly does that mean? Inquiring minds would like to know. Perhaps some enterprising French journalist could do us all a service and sketch out the way this would probably have unfolded if it had happened in Paris instead of New York.