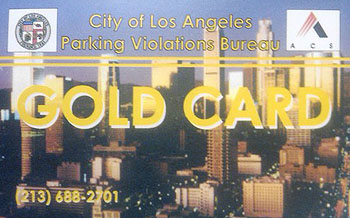 Yesterday the LA Times ran a story about a special parking ticket service for local VIPs that it called “Gold Card” service. I didn’t actually read the story and assumed that was just a catchy name the Times was using. But no. It turns out there is, literally, a Gold Card:

The service, which few outside of city government appear to know about, partly involves a plastic parking bureau “Gold Card” that is distributed to city offices. It includes a special phone number to call and on the back side notes that the holder may have an “urgent need to resolve any parking citation matter which requires special attention.” It promises “you will be immediately connected to our Gold Card Specialist.”

….Sarah Hamilton, a spokeswoman for Villaraigosa, said the mayor’s office had periodically used the program as one of many ways to help constituents. Callers who thought they didn’t deserve certain citations are referred to the Gold Card Desk, she said, adding that the program is open to anyone, not just VIPs or insiders.

“Any resident of the city who feels they received a citation in error, or who needs a sidewalk repaired or graffiti removed can call the mayor’s office for assistance,” Hamilton said. The Gold Card Desk is a comparable “resource for constituents.”

I just love that line. As the Times story makes clear, however, virtually no one who’s a non-insider even knows this program exists, let alone uses it.1 And the most common reason for tossing out tickets? Inability to pay — “a complaint Greuel’s investigation portrayed as a dubious reason for dismissal.” Indeed. Isn’t life wonderful for the rich and famous?

1Take Danny Legans, for example. “I wish they did let us know about it,” he told a Times reporter as he was paying an $88 ticket. Legans then asked officials inside about the program but was told it did not exist. “They said there is no such thing. You can’t appeal. They told me: You have 30 days to pay this ticket or it will be doubled.”