Natural gas fracking holds out the promise of producing enormous amounts of domestic energy for the United States. But is it safe? Among other things, one concern with fracking is that it releases methane into nearby groundwater:

A 2009 investigation by ProPublica revealed that methane contamination from drilling was widespread, including in Colorado, Ohio and Pennsylvania. In several cases, homes blew up after gas seeped into their basements or water supplies. In Pennsylvania a 2004 accident killed three people, including a baby.

In Dimock, Pa., where part of the Duke study was performed, some residents’ water wells exploded or their water could be lit on fire. In at least a dozen cases in Colorado, ProPublica’s investigation found, methane had infiltrated drinking water supplies that residents said were clean until hydraulic fracturing was performed nearby.

But is this just anecdotal and coincidental, or do fracking operations really pose a systematic danger to nearby water supplies? Via Stuart Staniford, here are the results of a new study of methane concentrations in drinking water near fracking operations, and as you can see, the levels are quite high and quite dangerous anywhere within a kilometer of the gas wells. The industry will undoubtedly push back against this and demand further study while simultaneously doing everything it can to inhibit further studies. But the possibility of serious danger is pretty obvious here. Further studies really do need to be done, they need to be done quickly, and safe levels need to be established. This isn’t just anecdotal anymore. 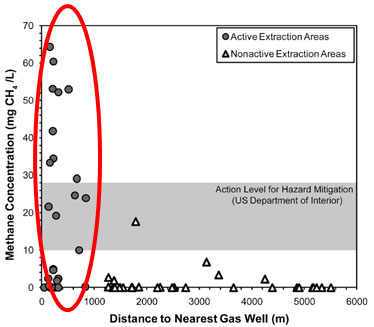