On Saturday, in a post about opposition to European bailouts from the German public, I asked, “Why should thrifty Germans bail out spendthrift euro countries on the periphery?” As it happens, this was bad phrasing: I didn’t mean to endorse this view, merely to point out that it was easy to understand why 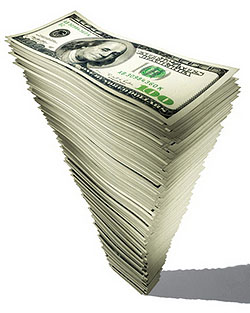 Germans might feel this way. But Matt Yglesias makes a good point in response to my apparent meaning:

I think this conceptual scheme of saver = responsible, borrower = irresponsible needs to be challenged. It’s true that German households were thrifty net savers. But a German household that saves isn’t engaged in a self-sacrificing pursuit, it’s getting paid interest. And the institutions paying the interest are doing it because they’re expecting to make a profit by offering loans. And when they offer the loans, they’re charging interest.

The entire claim of people in this line of work is that they’re good at making decisions about who to lend money to and what interest rate to charge them in light of default risk. When I got my mortgage it involved a phone call with a guy from Bank of America. The premise of the conversation was that of the two people on the call, one of us was a highly trained professional with expertise in mortgage lending and the other one was me. And it’s just the same with Irish borrowers and German banks. In that transaction it’s the Germans who are supposed to be the experts. When the whole thing goes sideways it’s the Germans who failed to be responsible stewards of the Eurozone’s capital.

Paul Krugman addresses this distinction directly in his column tonight:

What I’ve been hearing with growing frequency from members of the policy elite — self-appointed wise men, officials, and pundits in good standing — is the claim that it’s mostly the public’s fault. The idea is that we got into this mess because voters wanted something for nothing, and weak-minded politicians catered to the electorate’s foolishness.

So this seems like a good time to point out that this blame-the-public view isn’t just self-serving, it’s dead wrong.

The fact is that what we’re experiencing right now is a top-down disaster. The policies that got us into this mess weren’t responses to public demand. They were, with few exceptions, policies championed by small groups of influential people — in many cases, the same people now lecturing the rest of us on the need to get serious. And by trying to shift the blame to the general populace, elites are ducking some much-needed reflection on their own catastrophic mistakes.

There’s no question that ordinary borrowers sometimes act irresponsibly. They run up their credit cards too much, they buy more house than they can afford, and they don’t always save for rainy days. But Krugman is right: if you look at the fiscal and financial disasters of the past decade, they’re emphatically the fault of political and financial elites far more than they’re the fault of ordinary citizens. And yet, in the aftermath, it’s been ordinary citizens who have borne the lion’s share of the pain. For the most part, Wall Street and the wealthy have been asked to pay very little to make up for their mistakes.

Which gets us back to those German savers. It’s entirely understandable, I think, that the German public doesn’t feel like bailing out Ireland and Portugal and Greece. After all, they did nothing wrong. It was German banks and their creditors who acted irresponsibly, and yet they’re being treated with kid gloves at every turn. Instead of nationalizing banks and forcing creditors to take haircuts, European elites are basically asking German taxpayers to bail out the German banks that took their deposits and made irresponsible loans with them. Is it any wonder that the German public is non-thrilled about this?

Krugman’s whole column is worth a read. The public in both Europe and America has taken a considerable licking over the past few years. But the elites — well, in a lot of cases they’ve actually emerged from a disaster of their own making in better shape than before. This is, perhaps more than anything else, the most dispiriting result of the Great Collapse.