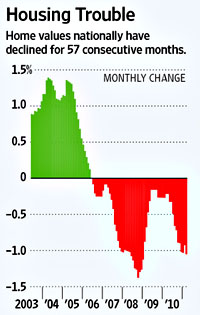 The Wall Street Journal reports on the trajectory of housing prices following the expiration of the first-time homebuyer credit last year:

Home values posted the largest decline in the first quarter since late 2008, prompting many economists to push back their estimates of when the housing market will hit a bottom.

….While most economists expected sales to decline after tax credits expired, the drag on the market has been greater than many anticipated. “We expected December and January to be bad” as the market reeled from the after-effects of the tax credit, said Stan Humphries, Zillow’s chief economist. But monthly declines for February and March were “really staggering,” he said. They indicate “a reflection of the true underlying demand, which is now apparent because most of the tax credit is out of the system, and it’s being completely overwhelmed by supply.”

….Prices are decelerating in large part because the many foreclosed properties that often sell at a discount force other sellers to lower their prices. Mortgage companies Fannie Mae and Freddie Mac have sold more than 94,000 foreclosed homes during the first quarter, a new high that represented a 23% increase from the previous quarter. More could be on the way: They held another 218,000 properties at the end of March, a 33% increase from a year ago.

Most analysts now expect that the housing market won’t bottom out until sometime next year. Until that happens, it’s unlikely that that the sluggish economic recovery we’re seeing right now will improve much.