It’s rather less intuitive that fairness demands that the wealthy not only pay more in taxes, but pay a larger percentage of income. But let’s accept that fairness does require it. Anyway, high-earners in America do pay higher rates. In 2008, the top 1% paid 38% of all federal income taxes, and the top 5% paid 58%. Indeed, America is the industrialised world’s champion of income-tax progressivity! If any country’s upper-crust pays its fair share, America’s does.

Notice the bait and switch there? (If you don’t, my blogging for the past eight years has been for nought.) First, there’s the insistence on judging tax fairness solely by federal income taxes. But if you take a look at total tax burdens (federal/state/local), America’s tax system is only very modestly progressive. Second, there’s the switch from tax rates to tax shares. It’s true that the top 1% pay a big share of all federal income taxes, and there’s a good reason for that: it’s because the top 1% earn a big share of all income.

For a better idea of what Obama was talking about, here’s a handy chart that EPI sent around today. It shows average overall tax rates over time and the picture isn’t very pretty. For the average schmoe (the bars on the right), tax rates have decreased only slightly. For the rich (the bars on the left), they’ve plummeted. And for the super-duper rich (the bars on the middle) they’ve gone down so much that on average they pay a lower tax rate than your average bank clerk.

So Will ought to be pretty happy. America’s tax code is progressive, but it’s not very progressive, and it’s getting less progressive all the time. Given the explosion in wealth at the top over the past 30 years, asking them to go back to Clinton-era rates — which is all that Obama is proposing — hardly seems like a vast unfairness. 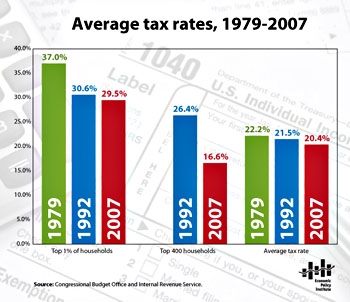