Alex Massie is tired of people complaining about all the coverage of the royal wedding:

You could be forgiven for thinking that, at best, the show is being put on for elderly wurzels, corn chandlers and backwoodsmen none of whom could be said to be much “in 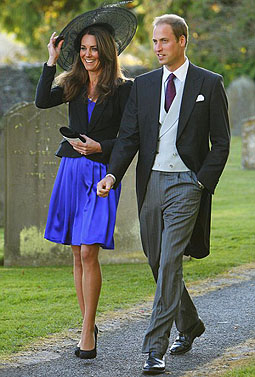 touch” with what modern Britain is supposed to stand for….And yet actually and quietly and gallingly for some, the people are interested in the wedding. A Guardian poll this week, published with some misgivings one likes to think, tries to spin this interest away but is forced to concede that 47% of the British population plan to watch at least some of the television coverage of the wedding on Friday. That is, by any measure, a strikingly large percentage of the population.

Despite the fact that I don’t myself care all that much about the royal wedding, I agree. Here’s how I look at things: all of us1 have cheesy crap that we happen to enjoy. For me it’s Survivor. For you maybe it’s romance novels. Or the Academy Awards. Or the CMAs. For other people it’s royal gossip.

And really, who cares? The royal wedding is a harmless pastime, there’s lots of great fashion to ogle over, there’s gossip galore, and it’s a fun diversion from whatever dreary stuff is consuming the chattering classes in our nation’s capital (or in Great Britain’s capital) at the moment. It’s not my cup of tea, but the fact that I don’t personally like it2 doesn’t instantly fill me with snobbish outrage over the fact that other people do.

So: those of you who are filled with snobbish outrage, get off your high horse. It’s all just a bit of glamour and spectacle that does no one any harm3. And really, admit it: you’re just mad that you didn’t get an invite, aren’t you?

1Well, maybe you don’t. Maybe you’re the second coming of Thomas Jefferson. If so, keep it to yourself, OK?

2My sister very decidedly does, however, and so do my cats — and they’ll prove it tomorrow. You can’t wait, can you?

3Actually, that’s not entirely true. The royal tsotchke industry is certainly getting a boost, but the government has declared tomorrow a holiday in Britain, and according to the LA Times, “Every bank holiday costs Britain as much as nearly $10 billion in lost productivity.” That “as much as nearly” formulation sounds a bit dodgy to me, but still, I guess the economy will take a minor hit.

Plus, let’s just go ahead and concede that Richard Quest is really, really annoying. His constant appearances on my TV have made my life that much poorer. I’ll be very happy when he finally goes away.