Politico reports that the repeal of DADT is going great so far:

The military’s repeal of its longstanding “don’t ask, don’t tell” policy is not facing resistance from troops and is on track to take full effect this 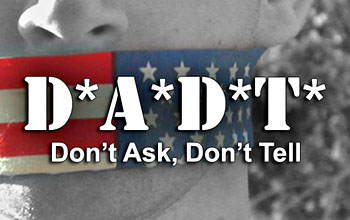 Clifford Stanley, the U.S. undersecretary of defense for personnel and readiness, told the House Armed Services Committee’s Subcommittee on Military Personnel that the military has trained 9 percent of its forces over the past month without any resistance to the new policy….Stanley, and U.S. Navy Vice Admiral William E. Gortney who also testified, said they hadn’t heard of any service members grumbling about the new policy. “I think we’re on the right path and I think midsummer is achievable” Gortney said.

That’s good news. But here’s my favorite part of the article:

Rep. Austin Scott (R-Ga.), […] wondered aloud whether DADT repeal is even necessary. He said he suspected that the gay and lesbian military who have been discharged have likely violated other standards of conduct.

Gortney quickly rejected the hypothesis, telling Scott that he had himself dismissed a Navy officer in the early 1990s, shortly after the policy was implemented, simply because the officer had told his chaplain that he was gay. The anecdote shocked Scott.

“He did not violate your standard of conduct?” Scott asked.

“That’s not the answer I thought you would give,” Scott said.

To which Gortney said quickly: “It happens to be the truth.

This kind of stuff really makes you wonder. Was Scott genuinely surprised by this? Is he so stuck in the conservative bubble that he truly didn’t know that the vast majority of gays and lesbians who have been discharged under DADT did nothing else wrong? These guys really need to get out more.