Paul Krugman writes that us college-educated types are hardly immune from being put out of work by computers:

Computers, it turns out, can quickly analyze millions of documents, cheaply performing a task that used to require armies of lawyers and paralegals. In this case, then, technological progress is actually reducing the demand for highly educated workers. And legal research isn’t an isolated example. As the article points out, software has also been replacing engineers in such tasks as chip design.

True enough. You know those thin copper lines on circuit boards that connect all the chips together? Creating those lines is called routing, and back when I first joined the high-tech world in the mid-80s, routing was done at my company by a room full of pretty skilled, pretty well paid pros. Engineers would compete to get their projects assigned to one router 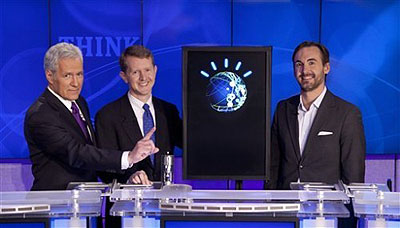 over another, because some of them had an especially good reputation for being able to perform complex routes quickly and efficiently. It was as much art as science.

Within a decade, it was all science and autorouting software had pretty much taken over the job. Humans were barely involved. The same thing has happened in the document world. Defendants in civil cases used to try to bury opposing lawyers during discovery by handing over truckloads of documents and hoping they would never be able to find the one or two damning documents in the bunch. Then high-speed scanners came along, and in big cases lawyers would send the whole pile of discovery documents to a service bureau, get the whole mess scanned and OCRed, and then do keyword searches. It was great. Later, software got more intelligent and more sophisticated and humans were less and less involved. Krugman extrapolates from this, suggesting that “quite a lot of white-collar work currently carried out by well-educated, relatively well-paid workers may soon be computerized. Roombas are cute, but robot janitors are a long way off; computerized legal research and computer-aided medical diagnosis are already here.”

Maybe so. It’s useful to think of two big challenges in the world of artificial intelligence. The first is creating analytic ability. This is what Watson did on Jeopardy! or what Deep Blue did in chess. The second is emulating the sensory perceptions of human beings. This is, if anything, even harder. Humans are extremely good at looking around a room, identifying objects, figuring out what they are, and then doing something about it. A robot that, say, was designed to go from room to room emptying wastebaskets would need only a modest amount of analytic ability but a huge amount of sensory ability. Right now we’re not really very close to getting there.

Still, it’s not clear to me just how far apart progress is on these fronts. It’s probably true that analytic ability is further along, but mainly because you don’t need to have a human level of analytic ability to be useful. A modest amount that merely does some of the prep work and reduces the number of hours it takes to do something is pretty handy. Sensory ability is a little different: you really do need something pretty close to full human capability to be very useful in an independent environment. So if I had to guess, I’d say that analytic ability will progress steadily, while sensory ability will remain largely limited and experimental until it gets to a useful level, at which point it will suddenly burst out of the lab and seemingly be everywhere within just a few years. This may still be a decade or two away, but really, that’s not a very long time.

Over the past few years, my guess about how soon truly useful AI will be available has gone down. Human level AI may still be quite a ways away (I don’t really know), but AI useful enough to create massive economic dislocations might well be no more than a decade away. Maybe two at the most.

In the meantime, I just hope that Mother Jones doesn’t figure out that they could almost certainly find some extremely bright, knowledgable, plugged-in Indian blogger who would work much harder than me and for a quarter of my salary. There probably aren’t a ton of Indians who could replace me, but there don’t need to be tons. There only needs to be one.